[Intro]
You expect us to go off your word?

[Verse 1: Acumental]
Yeah
Ponder the past, never question the present
Incessantly second guessing every sensible lesson
Lamentable, yes
I'm a tempestuous peasant, a pestilent person
Urgently ingesting the presence
So when the moon resembles a crescent
Let me illuminate the room, bitch, I been iridescent
Impressive phonetics, possessing unrelenting obsession with letters
Certain death is when you enter my presence
Swervin' downtown on the inbound track
Found sippin' Crown Apple out a big brown bag
My unreleased shit make my new shit sound wack
My new shit's dope though, so what you think 'bout that?
Yeah, Ac' and Term never taciturn
Crash and burn, headin' southbound on a pachyderm
Dark passenger with a coat, don't act concerned
Spectacular flow, you can't discern
The assertive assassin lurks in a bushel of basket fern
In search of another universe circling Captain Kirk
In determinant terminology, worthy vernacular
I'm a virtuous prodigy, not a word that I haven't learned
So, class adjourned, I'm a graduate now
Preposition, verb, adverb, adjective, noun How elaborate, wow
Term and Ac' enamor the crowd
That's the word, ask a bird, he could pass it around

[Verse 2: Terminal Knowledge]
Baboon howl at a half-moon, I'm so sick
Cats move bowels in the bathroom, no shit
Don't pick fights that you can't win, throats slit
Don't live life in the past tense, has-been
I think I deserve a standing ov'
Stabbing holes in the status quo, I'm tryin' to strike a nerve
Violent urges, how you survive the Purge
Always trying to get the finer word like a minor bird
My spine is curved and it kind of hurts
Treat a tall order like it's shorter like it's Simon Birch
We won, tree stump of a Redwood
Greet a speed bump with a left foot
Rumor first, rhyme in the sketchbook
Now I write rhymes in the textbook
Autograph signing the checkbook, word
Sound of silence, I never settle
Learned a lesson I already learned, I guess I never learn
Higher octane in a low octave
I got pain that I hold hostage
Clamp bake in the cockpit
Half-way to the cosmos
First name: Sweet Home
Last name: Chicago
Word, word
Explain lyrics
Correct lyrics 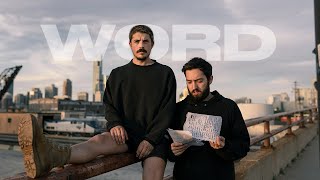