[Intro: Sample]
What's the most you ever lost on a coin toss?

[Verse 1: Acumental]
Yo, I'm tryna turn a couple quarters to a quarter mil' (Yeah)
Fortune lookin' unfortunate
Can't afford to ignore that I'm poor as shit
Can't sit even sorta still
Storm the hill with the force of a dozen horses
Torturous, I was born to kill
Abort your children, adopt a highway
Stop the crime wave (Uh)
Tryna rise to fame in a proper time frame
Drop the mic and take a bow
Every night I make the crowd go Radio Ga Ga, live at Live Aid
Wanderin' blind in the Beverly Hills, uh
Tolerance high, need some heavier pills
Led astray with every waking day the treachery builds
Death to the infidels, delve head over heels
I be that toe-tappin' totalitarian
Tell ya whole clan I'm finna fit 'em with toe tags and bury 'em
Very impaired, the bold brash American
No cash to share, I'm a broke ass embarrassment
Another run of the mill government shill
Pickin' your pocket when he can't cover the bill
I'm sick of it, ever since I was an innocent infant
I felt insignificant with little incentive
I wanna move to Haiti (Yeah), then to Tahiti (Yeah)
Playin' the ukulele, wittier than John Greenleaf
Juvenile delinquent sittin' too close to the tv (Move)
Mama always told me, "drink your milk and chew your Wheaties" (That's right)
Been penning bars, partial to petty larceny
Bubonic plague, an arsonist at the pharmacy
Forever lost, been startling Sheriff Bell
Carson Wells, Llewelyn Moss, and Carla Jean
Free show, Cinema Paradiso
Sittin' in San Quentin, sippin' this Tarantino
My id and my ego hidden in the keynote speech
Playin' Keno, word to all my east coast peeps, ayy
Hay is for horses (Uh), what do you pigs eat?
Habeas corpus, tell the judge to acquit
We stimulate your endorphins
Pick your favorite performance
Mangled and contorted, please, somebody fix me
Easier said than done We spread love like a speculum
Too many rappers Helen Keller, deaf and dumb
What?
I do a set then settle up
Settin' the record straight every second the record's spun

[Verse 2: Term K]
Beat so fat that it sat and the chair broke
Throne's heir pokin' the bear for the square folk
Spoken with air quotes, if it ain't broke, don't repair it (Nah)
'Sposed to weigh gold by the carat, uh
Ground and pound, I'm finna mount and finish in top position
Never end a sentence with a proposition
You gotta listen, bro, you deaf as f*ck (Deaf as f*ck)
Life is perfect as a pair of dice, homie, don't press your luck (Woo!)
I pick a pencil up to sharpen it
Stab you in the heart with it
A harsh critic, I'm hard-headed (Woo!)
Hard hittin', shot shootin', I'm shark finnin'
Been choosin' to stop losin' and start winnin'
I'm always laughing at myself (Hahaha)
Go back in time just to spit and watch my action figures melt
So many notches, had to add 'em to the belt
In fact, I'm pretty glad I did, imaginin' how bad I would've felt
Shoot blanks
Firm as a shoelace
Make moves vertically, Terminal two-face
Terminal too fake, travelin' light
With a baggie of white girl who determined to lose weight
Travelin' light years, traffic to veer through
Fear moves in the back of my mind, back in the rear view
Back of the line, finna wage war, I'm waitin'
If I happen to find what I came for, I'm takin' it (Woo!)
Stand up if you known to call a man's bluff (Stand up)
Smoke L's and choke 12 with handcuffs
Why bother? I dare ya to even try
A square with an eagle eye on the prize, my mind wanders
I goes in, it's no country for old men
Old heads tell me how so funky the flow been
No shit (Woo!), don't keep your word and it defeats the purpose (Uh)
And certainty will leave you hurtin'
It's Term

[Outro: Sample]
Don't put it in your pocket, it's your lucky quarter
Explain lyrics
Correct lyrics 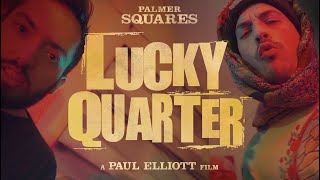