[Layzie Bone:]
This for the soldiers in Iraq and all of the soldiers in Kuwait
All of the soldiers in the hood, in every city and every state
Hold it down, hold your weight, with your Hi Power'd artillery
Like a fine tuned killin machine, on they neck like a guillotine
Brain power, that's what get you through the war
See that's what get you through the door, when you tryin not to be poor
Even more stay on your physical, it's a nation undivisible
They say we ain't divided, but I think they lost the principle
It's critical, take knowledge around you man, this shit is digital
Really though, stay on your focus, or just be miserable
Sufferin in the battlefield, lack of ammunition
Better be real with yo' henchmen, or you might just come up missin
Listen here, I know the art to this, I be on some heartless shit
This knowledge here is hard to get, c'mon soldier march to this
Just like Sun Tsu, many tactics, you ain't feelin me
Think you see me now nigga, catch me on the killin spree

[Mr. Capone-E:]
Can't f*ck with the soldiers, connected in the West
It's about time to bring back that "Thuggish Ruggish" shit
From Cleveland, Ohio, to the streets of L.A.
We're bringin back that gangsta shit since early K-Day Rest in peace Eazy-E, now we got new G's
Record companies scared, cause we strictly from the streets
Blood money, and the march continues
We won the West coast, don't get it twisted motherf*ckers!
Yeah, and the massacre's started
f*ck the weak hearted, we're notorious when we're marchin
Killin is necessary so make, way
Our brigade have grenades, rifles and AK's
Layzie Bone realized the movement started in the West
A ruthless organization, that's ready for any test
Against West, that's us
So watch your back cause we're comin, we don't give a f*ck

[Layzie Bone:]
The soldiers marchin on prepared for war, for war
Soldiers marchin on prepared for war, for war
How many times I gotta tell these knuckleheads that life is serious
Here today and gone tomorrow, but niggaz wanna be curious
Like little kids, get in some shit they ass can't get out
Had to sit 'em in the corner, put that ass on time-out
Gon' find out the hard way about the ways of the world
Little boys and little girls, bein raised in this world
Do it like Capone-E homie, have some goals you workin for
Be the best that you can be cause young Capone-E did it yo
Do it like you bonafied, invitation, wanna ride?
Keep it real, don't do it wrong, scary ones don't come outside
Bravery, never fear, courage dawg, that's what it is
Think the war ain't real? I been fightin it for years 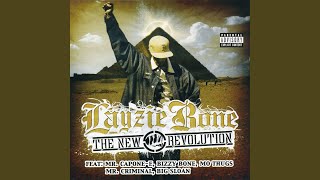