[Intro: Sample]
You know, it's good to let your anger out
And let love in
Ha ha, and, uh
Heh ha ha ha ha ha, ha, ah heh
I think it's good to
That if you can put anger on a picture
Instead of smacking someone in the face
It's a lot safer
Griselda

[Verse 1: Conway]
Roll the Swisher, get high
Free the homies behind the wall, free my niggas inside
All them niggas that died
Rest in peace to my niggas, I hope they live in the sky
Pour out some liquor, load your fifth up for your niggas and ride
For your niggas that got hit bad, and didn't survive
Sometimes I feel like, I'm the realest nigga alive
Since we was kicking doors, four niggas divvying pie
They ain't believe me when I told niggas the city was mines
Now look at me though
Buffalo nigga, but did records with Kool G though
Necklace is two kilos
Remember when the Feds gave fifteen to Cousin Tito
Me and Pat was right there, he took it like a G though
That's a real nigga, that's a fact, when I came home from doing two
He gave me a half ounce and a rack
And said, "You don't owe me shit, just put the city on the map"
That was eleven years ago and now I'm doing just that
Ask my baby momma how much I cried when Machine Gun died
When I pulled up and seen that yellow tape outside
Had me ready to grab the stick and go apes outside
I never found out who did it that shit ate my pride, I swear
But maybe that was a sign
Maybe God ain't want me killing them niggas and doing time
Maybe God wanted me here to kill 'em with the rhyme
Maybe that was part of his plan and part of the design
I don't know I'm not religious
All I know is I'm viciously gifted
When I script and then it's strictly for my niggas (woo!)
I might shed a tear listening to this shit
Pop the Spade cork like, "Machine Gun, we did it"
Damn, who would've known my crew would've blown
Every verse is verse of the year, shit is proven and shown
I needed West and Daringer, I couldn't do it alone
Remember that f*ck nigga pulled up using his chrome
Hit the back of my head and neck, I should've died, nigga
I feel like my nigga Dunce kept me alive, nigga Slaping my face like, "Bruh, open your eyes, nigga"
Shaking my head like, "f*ck that, you can't die, nigga"
Only real shit what I provide, nigga
I wrote this shit with the tears in my eyes, nigga
Now they gotta consider me top five, nigga
You hearing my shit, is you surprised, nigga?
You know what's funny, I wanted to quit
After I got shot in my head I seen my face like, "I'm done with this shit" (it's over)
Trying to spit my verses and mumbling and shit
Face twisted up looking ugly and shit
That Bell's Palsy had me looking like I had a stroke
But every bar raw like a slab of coke
And them same niggas that laugh and joke
Is doing bad and broke
And everything I drop is classic, dope
This the realest shit in my pad I wrote
This the realest shit that I wrote

[Verse 2: Westside Gunn]
Ayo, pulled the MAC out the Stone Island
Dough piling, my nigga doing fifty in the mountains
Posing in Gosha, I do it for the culture
Mastermind, braggadocious
You all soda, we in the kitchen like vultures
Bucket hat gator on the coaster
Big ass Ace need two bitches to pour it
Hopped in a four door 'gatti and floored it
A nigga gorgeous, rice pilaf and swordfish
This Warhol portraits been more sick
Stella McCartney feeling me, pardon me
The brass get drenched, draggin' on the marble, I'm awful
Stash cracks in his mouth, he had a jaw full
Jazz Just Dons in the mosque
In the cell, prayer rugs for the lost
These niggas wanna hang me on the cross
Allahu Akbar, Allahu Akbar
Walking over water, I can touch the stars
Allahu Akbar, Allahu Akbar

[Outro: Sample]
I know that the kids beneath me
They're visionaries, before their time
I don't revolt against anything
The only thing that I work against is the fact that no one told me that I could do this as a job
So the rest of my career is like, showing kids, like, yeah, you can do it too
Like, there is no wall
You know, it's a generation of us
And I think, the one thing that brings us together is that we just want to push culture forward 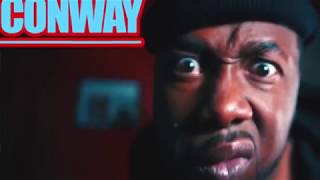