[Intro: Jay Worthy]
Yeah
Ayy, Westside Gunn, what's happenin' though?
It's your boy P Worthy
Tappin' in all the way from the west side of Bompton
You feel me?

[Verse 1: Jay Worthy]
This for my Park niggas, keep shit brackin', we at the park, nigga
Nella West, can't forget about none of my Park Millers
The ride or die, Pro Club rockers with Corduroy slippers
Lean sippers, tall can drinkin' on English malt liquor
Day one, some homies is still in there fightin' hot ones
Shootin' dice in front of heads up until the cops come
Big homies still at HQ, that's how the block run
Gunn told me, "Talk that shit", so I'ma do that (I'ma do that)
Car pullin' up we don't know, niggas like, "Who that?"
Berioso, shit get real, homie, mafioso
Couple keys in the trunk, got 'em off the boatload
On my way to Vegas with L and Ocho, woo

[Interlude: Boldy James]
I'm from where anything is possible, nigga
Where we at with it?

[Verse 2: Boldy James]
It's possible when the obstacles and the odds is against you that you faced with
Impatient, but I had to take it back to the basics
Fresh out the youth, he a couple months in that placement (Uh huh)
Third case tether bond, placed me on the ankle bracelet
Murder doin' drug traffic, never wrote or made a statement (Not once)
Left two bodies on the scene, they thought they both were gang related
Bruno got rid of the street, Jermaine ran, but he slipped
I was coppin' four and a half, break dancin' the big
Free my main mans in the brig, for the 'caine, did what it did
The neighbors kept callin' the hood, sendin' ravens to the spig
Was high profile, stayed in my lane, made it my biz Wasn't nowhere to be found when the feds raided the crib
We was outro, said they found a yopper and a AR
Was off the grid, but now them bitches got me on they radar
Did the chicken noodle soup, turned 10 to grey turk
All these pigeons in this coupe, feel like the Birdman Jr
Hooked up with the con creatures, cookin' up them fried penguins
Lookin' at a five piece just ridin' with this nickel
Got lime in the [?], got hitman hired to hit you
Bro got popped with them bricks, I wish I was drivin' when they flicked you
Would've fleeted from the scene, you know if I was have been with you
Would've took one for the team, wouldn't've never let them frisk you
Partly responsible for me graduating the distro'
I did the impossible and made it out of my sitcho', whatever 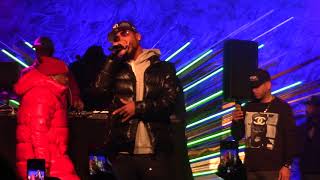