[Verse 1:]
I'm sportin rings and things, that's what money brings
If you act like you know I'll put you under my wing
If you act otherwise, and try to demise me
Take me for granted, then try to surprise me
I'm not a dreg, I'll break your legs
Because you're yellow, just like the yolk of an egg
He's DJ Diamond D, and I'm the Master Rob
MC's bitin my rhymes like they were corn on the cob
Or should I say cake, from the bites you take
Know what I'm sayin? I'm not playin

[Verse 2:]
Now you know bro, that I'm an MC pro
And like a lamborghini, I'm geared to go
I was raised in Forrest, across from Morris
I got more hair on my chest than Chuck Norris
Smooth as suede, sharp as a blade
I'm not a knave, but rap is the trade
To get paid and laid, have it made in the shade
Here me ridin in my car you'd think it was a parade
Sweet as lemonade; it's not a game of charades
Know what I'm sayin? I'm not playin

[Verse 3:]
Now... why do people sweat me, they should just let me
Go my way, but they just can't forget me
Is it my rhyme, or my personality?
Could it be my values, or morality?
Whatever the case, people stay in my face
It's startin to irk me, they tried to jerk me
But the tables are turned, it's them I'm jerkin I'm dead workin, and you're still lurkin
I know you wanna be, Master R-O-B
Do you know what I'm sayin? I'm not playin

[Verse 4:]
People who never used to speak, now they scream my name
But I know that it's just a popularity game
Girls who thought they were fly, now they all say hi
But I guess they didn't get it - I'm not widdit
Cause I'm not souped, I started rappin in a group
Problems arose, and they flew the coup
NMD, Charlie Rock, and Show and Tell
I'm the only one left, but hey that's swell
I'm not coppin a plea, nor Diamond D
You comprehend what I'm sayin? Dude, I'm not playin

[Verse 5:]
I'm not playin, or jokin, not from Hoboken
It's kinda hot in here that's why I'm soakin wet
But don't fret it ain't nothin but sweat
The name is Master Rob and I will never forget
When I was younger, and filled with hunger
Go to a jam and get told to get from under
The ropes it used to piss me off, but I was young
I'm tellin you now, that my time has come!
And we're the pair that dares, we're not scared of stares
Do you know what I'm sayin? I'm not playin
... I'm not playin
... know what I'm sayin?
... C'mon Diamond, we outta here, Strong City in effect, word up 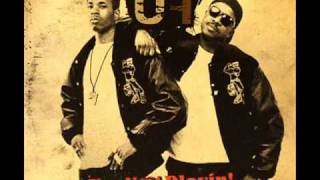