[VERSE 1: Fat Joe]
Microphone check one-two
I'm here to represent for the Diggin' In The Crates crew
And if you didn't tell, it's the bigger brother
Sometimes you can catch me with a undercover lover
I come from the Bronx AKA the Boogie Down
Used to get dough down low out of town
Now I'm makin records, so check it
Every time I grab the mic you know I'm gonna wreck it
Yeah, the name is Fat Joe, Diamond got the back
I'm gonna get paid, get laid and keep funds by the stack
Everybody knows the style is lethal
Fake MC's and wanna-be's I see through
You better make way cause Fat Daddy is home
I gotta say rest in peace to my man Tone
Montana, and yo, he had juice like Tropicana
His father's from San Juan, my father's from Havana
Cuba, girls give me blow like a tuba
When I hit skins you know I wear the lubri-
Cation, peace to the whole Zulu Nation
If you step to the crew well then you're facin elimination
Now it's time to show and prove
And everybody stand back and watch me move

[VERSE 2: Master Rob]
My rhymes are hotter than a cajun in the sun
And I used to pack a ton but that was just for fun
(Damn) It's Rob and Diamond on another hot track
And it's I'll for real, so watch the money stack
And in fact the shit takes me way, way back
To mockneck, Cazels and AJ slacks
Like back in the days in a project called Forest
That crazy neighborhood down the block from Morris
We used to play hookey to hang out with Joe
We would slay hookers like three in a row
And then we'd spark a l but them hoes had to go
Joe'd hit the beat, then Rob'd catch the flow
And after couple of hours then it's off to the show
So now you know, now on to the next plateau
(The hip-hop) fanatic, (voice) operatic
Cute ladies gaspin for air like they was asthmatic
(Delivery) on time (battle) it's showtime
I'm hotter than war time cause I'm gonna get mine
(The rhymes) like butter, (the rhymes) did I stutter?
Rob keeps it gutter, go f*ck with another brother
(Fo' sho') I thought you knew (the crew) is Zulu
Too true to hip-hop for them to undo
(The label) Strong City, (the rivals) I pity
The Original Jazzy Jay who always keeps it gritty
(The end) What son? (It's over) I'm never done
The rapper phenomenon, I done already dust 'em
One 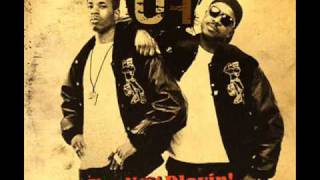