[VERSE 1: Master Rob]
You searched and seeked to find a beat
That can compete with me and DJ Diamond D
But that's absurd, I'm not the herb
And that's my word, me bein labeled wack is unheard
New generation, latest sensation
Watch the pro grow, peep the domination
Over MC's that sound like dictionaries
I leave 'em behind like my condo in Mount Airy
Poconos, as we can go blow for blow
And you can go and ask so and so
Who's the man with the diction and dialect
(Who is it?) It's Master Rob and I'm in effect
I flow so smooth that sometimes it blows my mind
The way I organize and design my lyrics
But I realize it's a gift
After hearin wack MC's raff and riff
And the man on the cuts is no slouch
He cuts the records until they say, "Ouch! "
Double D is his initials, other DJ's if you
Step to DJ Diamond D, you'll wish you
Hadn't (Why is that?) Because this man is so dope
You'll catch a natural high if you smoke
The scratches that he does, the lyrics in my song
What else could be wrong? Even my label is Strong
A lot of you sleep and even more snore
Wake up, cause we're kickin down doors
The masters of dialect
Yeah, I'm Master Rob and I'm in effect

[VERSE 2: Master Rob]
Hardcore, I soar without a flaw
I'm not a bore, I'm more like raw
The mic is my gun and when I draw
I make you say, "More" and pour
Like the man from hee-haw
Cause everytime I do a show, yo, I get an encore
Ask my man Mike from Bayshore
He'll tell you that I'm slicker than cold slaw
And you can't ignore the fact, I'm not the wack, black
See, I'm right and exact, I stay on time like Amtrak
And I'm treated like Goldy the Mack
Yeah, it's like that
Me and Diamond D make the hyped up tracks
I don't smoke no cracks (Why Rob?)
Cause it'll make you go out and wanna sell your gloves and your hat
Homeboy, I ain't with that, I wanna stay intact
Like my homeboy Zack who works at Radio Shack
Pickin up boxes and pilin 'em in a stack
And he breaks his back
For minimum wage, yo Zack, better snap out of that
But he's still down with the pack
And if there's static, he'll be the first to attack
Patience is what Zack lacks
Mess around with Zack and you'll hit the sack
Boy, cause I'm the real McCoy
The Master Rob, the rap's new heart throb
I get respect (spect) (spect) (spect)
Cause I'm in effect

[VERSE 3: Master Rob]
Now me and Diamond D are like the Mod Squad
Because we're simply mod
That means fresh, dope, hype, live
Hurry up Diamond D, cause it's a quarter to five
And I'm gettin really hungry
For another MC to try to stun me
I'm from the new school, but that's cool
I'm the valedictorian, you mighta saw me in
The Latin Quarter or the Zodiac too
With Supreme and Hush on the one and two
And on the mic and on the record I only be a second
Master Rob that's me and I guess that you reco-
Nize the man on the turns as Diamond D
Yo, is the boy fresh? (Really f...)
Cause he's a part of a whole and I'm the other half
This ain't nothin but a blast from the past
I'm hard and sweet like a peppermint
I got more heart than the man called Flynn
You wanna try me, you lose by a landslide
You got nerve, take a walk on the wild side
Don't be a sissy, go head and diss me
I know you jock me, sweat me, kiss me
On the knob of Rob
Cause breakin down MC's to their knees is my job
Cause I'm a winner like Bruce Jenner
I'm so d-e-f that I'm in e-
Ffect 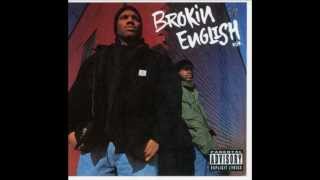