[VERSE 1: Master Rob]
Shhh...
Now everybody listen up, check one-two
(Do what you gotta do)
I'm flowin like the Mississippi river
Contain more proteine than grade-a liver
You said I'm a so-so, yo, so sit back
You threw up your joints and I went whip-whap-
Whip, yeah, now you got a big lip
Damn, I wonder why some brothers flip
Like pancakes, extendin false handshakes
And plastic smiles and all the while
The Master has to cast the vote
And that's guilty, yo, that's the verdict, you heard it
Yo Diamond, are you there? (Y-) (Y-) (You know it)
Yeah, now it's time to show it
Cause everything's in order and it's showtime
I get involved with the crowd cause I can hold mine
Like a sailor sittin at a bar
Low and behold, catch a risin star
The Ultimate Force, the talk of the industry
I'm low-key, I keep my shit (? indiscrete?)
I might laugh and joke a lot
Don't sleep, gee, I knock a rapper out the box
Like skelsy, you'll say, "Well hell he's
Kinda swift with the gift I must admit"
These are the ingredients for another hit

[VERSE 2: Master Rob]
Spending hours with Diamond lookin for loops
(Yo Rob, how's this?) The question is moot
So, excuse me as I kiss the sky
I'm straight up and down like Bed-Stuy
The track is like crack, the rush is intense
Expandin and gettin dense
To the point where I can sit back and say I wouldn't have it any other way, okay?
Let's get somethin straight, I get papes
Hear my joint on a Kid Capri tape
In a Benz, a Beamer, or a limo
Huh, you can hear my demo
Boomin like a Dapper Dan suit
Everything's for real, I could never be a fluke
I hold my head and stay well fed
Don't try to get fat because that shit is dead
Like a battery that's three months old
Me and Diamond are on the road
To the riches, that's where everything switches
Brothers stop spreadin rumors like little bitches
About my crew, and get a forty
Gettin naughty, tell your boys that you saw me
Catchin wreck I collect respect
On stage, vinyl, CD or cassette
Extremely legit
These are the ingredients for another hit

[VERSE 3: Master Rob]
Ultimate productions, Ultimate lyrics
An Ultimate combination to make you feel it
You might say to yourself, yeah, they can better it
But you can save that kiddiegarten rhetoric
Patience is a virtue
And I can go the whole nine yards just like Herschel
Walker, cause I'm a night stalker
I got my own, I could never be a hawker
Yeah, now that's the ticket
I'm gettin funky like Wilson Pickett
James Brown and Rufus Thomas
I captivate the crowd, that's a promise
It doesn't matter where I go
New York, L.A., Detroit or Chicago
And overseas promoters say, "Please come back"
Because I got it like that
So remember the Force is Ultimate
These are the ingredients for another hit 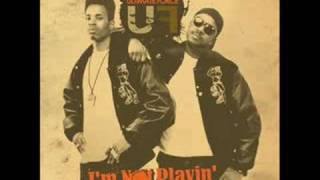