[Mc Ren]
Prisoner like a hostage
Yo, you should of covered your muthaf*cking head like an ostrich
Deep in the dirt 'cause you's a sucker
And you ass up high so I can kick the muthaf*cker
Don't try to hang your best abroad
'Cause my foot will be so far up you ass, you're get hemroids
Before you try to f*ck wit Ren
I'll put two in your ass and you'll be shitting a size 10

[Dr. Dre]
First come, first serve, whoever's got the nerve
Step up and get what you deserve
Other words if a muthaf*cking hip-hop maniac
Brainiac, so what you oughta do is step the f*ck back
But how the f*ck you think a rapper last
Wit your ass saying shit that is said in the past
Yo, be original, your shit is sloppy
Get off the dick you muthaf*cking carbon copy

[MC Ren]
Falling deep in the drums so many of styles
Is one of the reasons a nigga ran a hundred miles
Cheating and not beating, the crowd I kept seating
But weak muthaf*ckas biting off and they kept eating
Styles that kept them full of bull
'Cause the vocals were local in nightclubs and not getting paid in full
They got the nerve to cuss
Only reason niggaz pick up your record is cause they thought it was us

[Dre]
Yo, giving what I gotta give, doing what I gotta do
You don't care for me, so who gives a f*ck about you
You can't harm me, alarm me
'Cause we're the generals in this f*cking hip-hop army
The niggaz wit attitudes if you didn't know
We blow, flow and getting loose slow from the get go, yo
Try us and take it
Yo, f*ck this shit, Yella, kick the break in

[Chorus]
It's the real thing, you are now real, real niggaz, niggaz

[Ren]
You can run but you can't hide, you know I'm a find'cha
'Cause a nigga like Ren's only 2 steps behind'cha
Don't look back, 'cause you're shaking and all scared
A nigga in black can be your scariest nightmare
So sleep wit the lights on, forget that the mic's on
Don't step on my muthaf*cking stage without nike's on
Don't say it's psychoand then you just might go
Mentally f*cked up when I let the right blow

[Dre]
All these niggers wit the jibber jabber
But couldn't kill a fly wit a muthaf*cking sledge hammer
Gangstas in black are out there
But only because, yo, it's the shit we wear
On my muthaf*cking dick
But I'm a love it when you drop like a muthaf*cking brick
So, yo, step off, go to bed, 'cause if you're mislead
You get a muthaf*cking bullet in your dome head

[Eazy-E]
Black, the good, the bad, the ugly, you see
A little streetwise nigga, you know me Rolling wit some real niggaz playing for keeps
But you muthaf*ckas know who run the streets
Wit that hardcore hip-hop rap shit
[Ren](Now how much harder can another nigga get)
Trying to be like us, sound like us, dress like us
[Dre](Ashes to ashes and dust to dust
So nigga, nigga, nigga, nigga, nigga, nigga, please
Since you're on the dick why don't you drop to your knees
'Cause I'm a muthaf*cka that's out to kill
Eazy-E, a nigga that's real

[Dre]
Real niggaz, straight off the streets of Compton
Quick to get in your shit without second thought
And if your ass get smoked, it's my bullet you caught
So if you're talking shit about the niggaz in black
Bow down to the King's and Raider's hats

[Ren]
They played out, that's what niggaz were chanting
One nigga left and they said we ain't happening
People had thought we was finished and then done wit
But if you think about it, yo, we really ain't done shit
Yet, so cover your ears and wipe your tears
And quit sniffing all over my dick for new ideas
And when the new record come, I'll come like a f*cking bomb
Asking for f*cking money, don't buy you a f*cking crumb
You're on the dicks of four niggaz not one
And when it comes to dicks, you don't even have one
So brace yourself to make sure you don't get f*cked up
Because if I let you slide, it's just 'cause you lucked up
Don't come in my face again, because I'm a floor ya
And if you're a bitch, I'm a f*cking ignore ya

[Dre]
Lost in a muthaf*cking world of madness
Sadness, but Dre is just a nigga that gladdest
Sucking muthaf*ckas like you, making wack jams
Because it only shows you how dope I am
Never try to ignore us
When I'm expressing, stand still like you're full of rigamortis
'Cause I'm a real nigga, but I guess you figure
You can break me, take me, but watch me pull the trigger
Dre is just a nigga wit hard, a nigga that's smart
A nigga that's pay to say what others are scared to play
We started out wit too much cargo
So I'm glad we got rid of Benedict Arnold
Yo, NWA, criticize for what we say
But I'm a do the shit anyway
'Cause I'm the muthaf*cking doctor,never faking
Yo, Yella, kick the muthaf*cking break in

[Ren]
NWA , straight ouut muthaf*cking Compton
Taking over shit in all of the 1990's
Yo, Dr. Dre, DJ Yella, Eazy-E
And I am MC Ren, yo, NWA taking over this muthaf*cka y'all 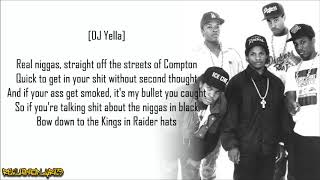