Fuck Tha Police
N.W.A
I Ain't Tha One A Bitch Iz A Bitch Something Like That I'd Rather Fuck You The Dayz Of Wayback Quiet On Tha Set Niggaz 4 Life Hello Parental Discretion Iz Advised Express Yourself
N.W.A wiki Fuck Tha Police video N.W.A twitter


Right about now, NWA court is in full effect.
Judge Dre presiding in the case of NWA versus the police department.
Prosecuting attourneys are MC Ren, Ice Cube, and Eazy muthaf*ckin E.
Order, order, order. Ice Cube, take the muthaf*ckin stand.
Do you swear to tell the truth, the whole truth
and nothin but the truth so help your black ass?

Why don't you tell everybody what the f*ck you gotta say?

f*ck that shit, cuz I ain't tha one
For a punk muthaf*cka with a badge and a gun
To be beatin on, and throwin in jail
We could go toe to toe in the middle of a cell

f*ckin with me cuz I'm a teenager
With a little bit of gold and a pager
Searchin my car, lookin for the product
Thinkin every nigga is sellin narcotics

You'd rather see me in the pen
Then me and Lorenzo rollin in the Benzo
Beat tha police outta shape
And when I'm finished, bring the yellow tape
To tape off the scene of the slaughter
Still can't swallow bread and water

I don't know if they fags or what
Search a nigga down and grabbin his nuts
And on the other hand, without a gun they can't get none
But don't let it be a black and a white one
Cuz they slam ya down to the street top
Black police showin out for the white cop

Ice Cube will swarm
On any muthaf*cka in a blue uniform
Just cuz I'm from the CPT, punk police are afraid of me
A young nigga on a warpath
And when I'm finished, it's gonna be a bloodbath
Of cops, dyin in LA
Yo Dre, I got somethin to say

M. C. Ren, will you please give your testimony to the jury about this f*cked up incident.>

f*ck tha police and Ren said it with authority
because the niggaz on the street is a majority.
A gang, is with whoever I'm stepping
and the motherf*ckin' weapon
is kept in a stash box, for the so-called law
wishin' Ren was a nigga that they never saw

Lights start flashin behind me
But they're scared of a nigga so they mace me to blind me
But that shit don't work, I just laugh
Because it gives em a hint not to step in my path
To the police I'm sayin f*ck you punk
Readin my rights and shit, it's all junk
Pullin out a silly club, so you stand With a fake assed badge and a gun in your hand

But take off the gun so you can see what's up
And we'll go at it punk, I'ma f*ck you up

Make ya think I'm a kick your ass
But drop your gat, and Ren's gonna blast
I'm sneaky as f*ck when it comes to crime
But I'm a smoke em now, and not next time

Smoke any muthaf*cka that sweats me
Or any assho that threatens me
I'm a sniper with a hell of a scope
Takin out a cop or two, they can't cope with me

The muthaf*ckin villian that's mad
With potential to get bad as f*ck
So I'm a turn it around
Put in my clip, yo, and this is the sound
Ya, somethin like that, but it all depends on the size of the gat

Police, open now. We have a warrant for Eazy-E's arrest.
Get down and put your hands up where I can see em.
Just shut the f*ck up and get your muthaf*ckin ass on the floor.
[huh?]>

and tell the jury how you feel abou this bullshit.>

I'm tired of the muthaf*ckin jackin
Sweatin my gang while I'm chillin in the shackin
Shining tha light in my face, and for what
Maybe it's because I kick so much butt

I kick ass, or maybe cuz I blast
On a stupid assed nigga when I'm playin with the trigga
Of any Uzi or an AK
Cuz the police always got somethin stupid to say

They put up my picture with silence
Cuz my identity by itself causes violence
The E with the criminal behavior
Yeah, I'm a gansta, but still I got flavor

Without a gun and a badge, what do ya got?
A sucka in a uniform waitin to get shot,
By me, or another nigga.
and with a gat it don't matter if he's smarter or bigger
[MC Ren: Sidle him, kid, he's from the old school, fool]

And as you all know, E's here to rule
Whenever I'm rollin, keep lookin in the mirror
And there's no cue, yo, so I can hear a
Dumb muthaf*cka with a gun

And if I'm rollin off the 8, he'll be tha one
That I take out, and then get away
And while I'm drivin off laughin
This is what I'll say

The jury has found you guilty of bein a redneck,
whitebread, chickenshit muthaf*cka.
Wait, that's a lie. That's a goddamn lie.
I want justice! I want justice!
f*ck you, you black muthaf*cka!> 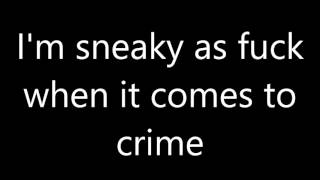