[The D.O.C.]
Aiyyo Dre, what's goin on man? What's goin on?
Ay what ch'all gonna do for this last record?
Nah tell me what cha'all gonna do?
Okay, you want me to do the intro? Aight!

Parental discretion is advised for the moment
While I'm getting candid, now understand it
Ain't too typical in any way, though the pro
on the mic is the D.O. to the C. this is an intro
I know the DOC makes you want to take a valium
So buy a bucket cause upcomin is my album
And for the record, meanin my record, check it
Listen to the single and you'll be like, yo, I gotta get it
But in the meantime, listen to the rhyme
of the Dr. Dre, played wit N.W.A.
Yella's on the drum roll, rockin the beat
Aiyyo Dre, where's you gonna take this shit man?

[Dr. Dre]
Aiyyo, let's take it to the street (WORD UP!)
Let 'em understand perfection
Let knowledge be the tool for suckers to stop guessin
Cause I don't give a f*ck about a radio play
Observed the english I display
Lyrics for the adults, children have been barred
and scarred from listenin to somethin so motherf*ckin HARD
Dope, pumpin that's so my shit will never falter
Yo it's Dre so f*ck the "Mind of Minolta"
Psycho, like no, other motherf*cker
So step to me wrong, G-O for what you N-O
But be warned, never will I leave like a regular
Cause I'm a little better than the regular competitor
I use to see 'em on stage
Earnin money like a thief, but without a guage
Until I got full, of clockin the lame gettin pull
(They said you wasn't gon' get paid)
Nah that's bullshit! They like it stylistic
And I enchant the crowd like I'm a mystic
(C-C-C-C) C-C-C-cameras are flashin, when I'm in action
A photo, or fresh with a flair for fashion
Pure simplicity, see it's elementary
You hear one of the hardest motherf*ckers this century
Try to comprise a word to the wise and the guys
Parental discretion is advised

[MC Ren]
Ren is most extremely high performance
The black hat cause I worn this, cause it's like enormous
Some shit I don't take it, not even in a toliet
And shit from a sucker, put in a pot and I'll boil it
Turn up the pilot as it burns
And maybe, the motherf*ckers will learn
I'm not a sub, cause I speak sensible
Not considered a prince, cause I'm a principal
I'm engineerin; the shit that you're hearin Cause when it comes to power, I'm power steerin
Silly you say, I say you're silly when you say it
Rushin to the eject, to put my shit in and play it
It's like Apollo, but I'm not an amateur
And I'm not givin a f*ck, while I'm damagin ya
It's for the record; so Ren's lyrics is gonna spin it
And if there was a trophy involved, I'll win it
Possession is mine and I'm the holder
Cause a nigga like Ren don't give a f*ck cause I'm older
So for you to step off would be wise
And say f*ck it, parental discretion is advised

[Ice Cube]
I be what is known as a bandit
You gotta hand it to me when you truly understand it
Cause if you fail to see, read it in braile
It'll still be funky -- so what's next is the flex
of a genius, my rapid-stutter-steppin if you seen this
dope, you hope that I don't really mean this
But if played, made the grade or high-top fade
It's not my trademark when I get loose in the dark
You guess it was a test of a different style
It's just another motherf*cker on the pile
Drivin your ass with the flow of your tongue
You hung yourself short, the after-knowledge was brung
to your attention, by the hardest motherf*ckin artist
that is know for lynchin any sucker in a minute
Stagger 'em all
When I start flowin like Niagara Falls
Ice Cube is equipped to rip shit in a battle
Move like a snake when I'm mad; and then my tail rattle
I get low on the flow so let your kids know
When I bust, parental discretion is a must

[Eazy-E]
Little did they know, that I would be arrivin
And it's surprisin, rockin it from where I been
But it's the E here to take, no mistake to be made
in the trade where funky ass records are bein played
f*ck the regular, yo as I get better the
bitches wanna trick and go stupid up on the dick
So I get 'em hot, thinkin they're gonna get it
As they sit, rubbin their legs like a cricket
To you it may be funny, but
there's no service of beef, without money
So slip the C-note, and you can choke
on a wing-ding-ding-a-ling down your throat
Foreplay; to me ain't shit
When you spread 'em I'm ready, then you can get the dick
of the Eaze, if you can deal with the size
But if you can't, parental discretion's advised! {*echoes*}

{*bass guitar and piano solo for a minute*}

[Unknown voice at the end after band breaks down]
Shut the f*ck up!!
Explain lyrics
Correct lyrics 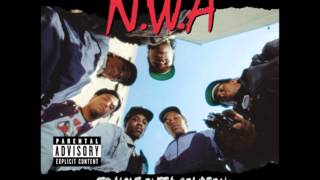