100 Miles And Runnin'
N.W.A
Fuck Tha Police I Ain't Tha One A Bitch Iz A Bitch Something Like That I'd Rather Fuck You The Dayz Of Wayback Quiet On Tha Set Niggaz 4 Life Hello Parental Discretion Iz Advised
N.W.A wiki 100 Miles And Runnin' video N.W.A twitter

And why do we call ourself 'Niggaz 4 Life'.
'Cause if we die we still gon' be some dead niggas.

"You don't really think you're gonna get away, do you?"
"We haven't spotted them yet."
"But they're somewhere in the immediate vicinity."

[MC Ren]
A 100 Miles and Runnin'.
MC Ren, I hold the gun and
You want me to kill a mutherf*cker and it's done in.
Since I'm stereotyped to kill and destruct -
Is one of the main reasons I don't give a f*ck.
Chances are usually not good
'Cause I freeze with my hands on a hot hood.
And gettin' jacked by the you-know-who.
When in a black and white the capacity is two.
We're not alone, we're three more brothers, I mean street-brothers.
Now wearin' my dyes, 'cause I'm not stupid, mutherf*ckers.
They're out to take our heads for what we said in the past.
Point blank - They can kizz my black azz.
I didn't stutter when I said "f*ck Tha Police".
'Cause it's hard for a nigga to get peace.
Now it's broken and can't be fixed.
'Cause police and little black niggers don't mix so
Now I'm creepin' through the fall.
Runnin' like a team. Well, see, I might have slayed y'all.
So for now pack the gun and
Hold it in the air.
'Cause MC Ren has a 100 Miles of Runnin'...

"Into this news. Four fugitives are on the run."
"FBI sources tell us that the four are headed"
"100 miles to their homebase, Compton."

[Dr. Dre]
Runnin' with my brothers, headed for the homebase.
With a steady pace on the face that just we raced.
The road ahead goes on and on.
The shit is gettin' longer than the mutherf*ckin' marathon.
Runnin' on but never runnin' out.
Stayin' wired and if I get tired, I can still try out.
Hitchhikin' if that's what it gotta do.
But nobody's pickin' up a Nigga Witta Attitude.
Confused...
Yo, but Dre's a nigga with nuthin' to lose.
One of the few who's been accused and abused
Of the crime of poisonin' young minds.
But you don't know shit til you been in my shoes.
And Dre is back from the C-P-T.
Droppin' some shit that's D-O-P-E.
So f*ck the P-O-L-I-C-E!
And any mutherf*cker that disagrees.
Stuck and runnin' hard, hauling ass.
'Cause I'm a nigga known for havin' a notorious past.
My mind was slick - my temper was too quick.
Now the FBI's all over my dick.

[Eazy E]
Got us tick and runnin' just to find the gun that started the clock. That's when the E jumped off the startin' block.
A 100 Miles from home and ,yo, it's a long stretch.
A little sprintin' mutherf*cker that they won't catch.
Yeah, back to Compton again.
Yo, it's either that or the Federal pen.
'Cause niggas been runnin' since beginning of time.
Takin' a minute to tell you what's on my mutherf*ckin' mind.
Runnin' like I just don't care.
Compton's 50 miles but , yo, I'mma get there.
Archin' my back and on a straight rough.
Just like Carl Lewis I'm ballin' the f*ck out.
From city to city I'm a menace as I pass by.
Rippin' up shit just so you can remember I'm
A straight up nigga that's done in, gunnin' and comin'
Straight at yo ass.
A 100 Miles and Runnin'...

This one goes out to the four brothers from Compton.
You're almost there, but the FBI has a little message for you:
"Nowhere to run to, baby. Nowhere to hide."
Good luck brothers.

[MC Ren]
Runnin' like a nigga I hate to lose.
Show me on the news but I hate to be abused.
I know it was a set-up.
So now I'm gonna get up.
Even if the FBI wants me to shut up.
But I've got 10 000 niggas strong.
They got everybody singin' my "f*ck Tha Police" song.
And while they treat my group like dirt,
Their whole f*ckin' family is wearin' our T-shirts.
So I'mma run til I can't run no more.
'Cause it's time for MC Ren to settle the score.
I got a urge to kick down doors.
At my grave like a slave even if the Ren calls.

[Dr. Dre]
Clouds are dark and brothers are hidin'.
Dick-tricklin' at the sunny mutherf*cker's are ridin'.
Started with five and, yo, one couldn't take it.
So now there's four 'cause the fifth couldn't make it.
The number's even - now I'm leavin'.
We're never gettin' took by a bitch with a weave in.
Her and the troops are right behind me.
But they're so f*ckin' stupid, they'll never find me.

[Eazy E]
One more mile to go through the dark streets.
Runnin' like a mutherf*cker on my own two feet.
But you know I never stumble or lag last.
I'm almost home so I better haul ass.
Tearin' up everything in sight.
It's a little crazy mutherf*cker dodging the searchlight.
Now that chase, the shit, is done and
Four mutherf*ckers goin' crazy with
A 100 Miles of Runnin'! 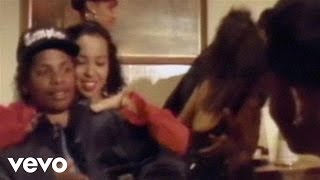