[Verse One: Eazy-E]
I don't drink brass monkey, like to be funky
Nickname Eazy-E yo' 8 ball junkie
Bass drum kickin, to show my shit
Rappin holdin my dick boy, I don't quit
Crowd rockin motherf*cker from around the way
I got a six-shooter, yo' mean I'm brave
Rollin through the hood, to find the boys
to kick dust and cuss, crank up some noise
Police on my drawers, I have to pause
40 ounce in my lap and it's freezin my balls
I hook a right turn and let the boys go past
then I say to myself, "They can kiss my ass!"
Hip to get drunk got the 8 in my lips
Put in the old tape Marvin Gaye's greatest hits
Turn the shit up had the bass cold whompin
Cruisin through the Eastside, South of Compton
See a big ass, and I say word
I took a look at the face, and the bitch was to the curb
Hoes on my tip for the title I'm holdin
Eazy-E's f*cked up and got the 8 ball rollin

[Verse Two: Eazy-E]
Ridin on Slausson lookin for Crenshaw
Turned down the sound, to ditch the law
Stopped at a light and had a fit
cause a Mexican almost wrecked my shit
Flipped his ass off, put it to the floor
Bottle was empty so I went to the store
Nigga on tilt cause I was drunk
See a sissy-ass punk, had to go in my trunk
Reached inside cause it's like that
Came back out with a silver gat
Fired at the punk, and it was all because
I had to show the nigga what time it was
Pulled out the jammy and like a mirage
a sissy like that got out of Dodge Sucka on me cause the title I'm holdin
Eazy-E's f*cked up and got the 8 ball rollin

[Verse Three: Eazy-E]
Olde English 800 cause that's my brand
Take it in a bottle, 40, quart, or can
Drink it like a madman, yes I do
f*ck the police and a 502
Stepped in the party, I was drunk as hell
Three bitches already said, "Eric yo' breath smells!"
40 ounce in hand, that's what I got
"Yo man you see Eazy earlin in the parkin lot?"
Stepped on your foot, cold dissed yo' hoe
Asked her to dance and she said, "Hell no!"
Called her a bitch cause that's the rule
"Bitch, who you callin a bitch?!"
Boys in the hood tryin to keep me cool
You tell my homeboy you wanna kick my butt
I walked in your face and we get 'em up
I start droppin the dogs, and wathc you fold
Just dumb full of cum, got knocked out cold
"Made you look sick you snotty-nosed prick!
Now your fly bitch is all over his dick!"
Punk got dropped cause the title I'm holdin
Eazy-E's f*cked up and got the 8 ball rollin

[Verse Four: Eazy-E]
Pass the brew motherf*cker while I tear shit up
and y'all listen up close to roll call
Eazy-E's in the place I got money and juice
Rendezvous with me and we make the deuce
Dre makes the beats so god damn funky
Do the Olde 8, f*ck the brass monkey
Ice Cube writes the rhymes, that I say
Hail to the niggaz from C.I.A.
Crazy D is down and in effect
We make hardcore jams, so f*ck respect
Make a toast punky-punk to the title I'm holdin
Eazy-E's f*cked up and got the 8 ball rollin 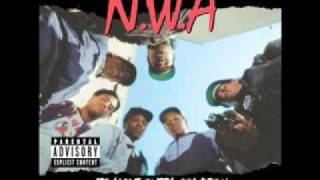