(If you know the song, sing along)

[ J. Sands ]
Ah
Yo
1-2
3 to the 4
Ah
Yo, 5 to the 6
Lone Catalysts, check this
Ah
Yo
When you say you emcee, it doesn't matter
It goes through my head as just chit-chatter
Tryin to front like the Don Juan thug
I pull the plug at the club that you rock at
You need to drop that (oooohhh...)
Mic, give it to the professionals, Lone Catalysts
Ill strategists, steppin to this could be hazardous
To your health, put your DJ up on a shelf
Let him rest a minute till my man Rawls is finished
Put down the Cristal bottle and stop drinkin
That dream is over, ye yacht is sinkin
What you thinkin, I snuff you out while you're blinkin
Strike quickly, swiftly, J. Rawls, hit me
Once, twice, I'm nothin nice with the vocal
Throwin low blows, leavin my tag on your logo
It's only right, rhymes get tossed like phoney dice
Under pressure, I come through like Tony Rice
Breakin down your offense over a four-bar sequence
Beat your shadow, the ill delinquent who keep your fleet tense
In a rhyme combat, embedded tracks
And melt the wax from raps that attack
Kamikaze like the Japs
Niggas too close just move back
Gotta breathe better, dark skies and cold weather
's all I see in Pittsburgh, but yo, back to the discussion If it wasn't meant to be, you know, it just wasn't
Just ask my cousin, he probably laced about a dozen
Chickens in your fortress, a metamorphis, a change
Go from J. Sands to Jermaine, play the game with the devil
Stocks and bonds, another level
To make cream, hands stay clean like ????
Been a dream ever since I was the age of 13
(Ha! Ha! Ha! Ha! Hihihehe...)
Sucker, you missed, aimin that mic at MC J. Sands
We're the Lone Catalysts, is your name Sam?
Cause if it is, step off or get your windpipe tossed
Grab your coat and your scarf and just call it a loss
And hit the road, Sam
And you don't you come back no more, no more, no more, no more
Hit the road, Sam, and don't you come back no more
Check it out
Now I take precaution when I diss an MC
If it's a crew it makes no difference to me
Then maybe I'll flip on the fifth or sixth
Rhyme that I kick - like this
Cause the ryhme that doesn't flip is so incomplete
And maybe - Rawls will give you a beat
You can write your own rhymes, just practise a little
It's so simple, unlike a riddle
It's as easy as countin to 1-2-3
In other terms: letters L-o-n-e
C-a-t-a-l-y-s to the t is how he be
Yo check it
MC J. Sands checkin out
Special dedication
To my DJ J. Rawls
[ad libs] 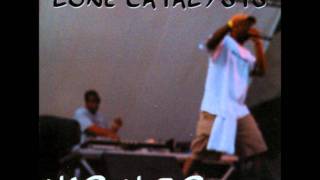 check amazon for Paper Chase mp3 download
these lyrics are submitted by kaan
browse other artists under L:L2L3L4L5L6L7L8
Songwriter(s): Jason Rawls, Jermaine Sanders
Record Label(s): 2001 B U K A
Official lyrics by