[Big Sloan:]
I'm the hardest MC you ever heard in your life
Big Sloan and Layzie Bone homie, murder your wife
We come into your house and, leave your frame frozen
And tec smokin, 24's on a hang like Hulk Hogan
My group blow do's and 21 coast soldiers
Hit you hard in ya sternum, make ya chest touch ya shoulders
Hi Power vultures in a Caddy with coat vultures
Gorillas on the block that I bust off of stage coaches
California G's on, billboards and posters
Air Force Ones, black hoodies and Range Rovers
It's the takeover, on the block in a black Nova
With a sick-ass team with cats from Nova Scotia
A vest and two holsters, we pop like Orville Reden'
With 30-cals that flip like Mary Lou Retton
Uh-huh, you know we don't play them games
Lil' Lay and Big Sloan, yeah, spittin the flames

[Layzie Bone:]
Nigga I'm a be sleepin with my boots on when the war pop off
Waitin for the thieves tryin to creep, sneak and pop my locks off
Run up on me if you wanna, it be murder she wrote
I'd rather be judged by twelve than dead and left for broke
Pick up the phone, call Sloan, "Nigga come over quick
Cause there's some bustas in the mix wanna have me carried by six Bring the guns and extra clips, nigga watch a nigga flip"
We won't stop until they hit, f*ck it, murder yo' clique
You know them bullets ain't got no names on 'em, they ain't prejudice dude
I ain't lyin, I ain't dyin, 'til I'm scheduled to
I'm ahead of you by two steps, maybe fo', five, six
Like Green Bay I lead the +Pack+, what'chu know 'bout this?
Niggaz know my hits, this ain't the first time I said it
Quick to leave a body shredded and yo' kids beheaded
Got a mil', nigga bet it, and I'm takin it all
Niggaz lames, they pathetic, I'm not takin the fall

[Dre Ghost:]
There's a hell of a lot of ways to die, do somethin
Bullshittin'll have your life set up to lose somethin, uhh
Prove somethin, uhh, 'fore you take your last breath
Or those couple of steps, uhh
Catch a nigga by the drum baby, and leave him alone
He'll bleed in front of his children
And scope out haters' situations
It's all Mo Thug and that's how we do it baby, killers 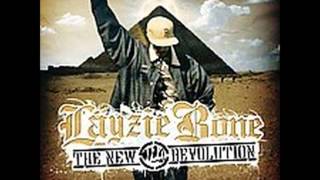