[Chorus x3]
Nigga, it's all about the drama
Packin' pistols when we ride
Mothaf*ckas about to die
It's about to be some shit!

[L-Burna]
I'm talkin' 'bout cats in the worst way
Nigga, put it on my birth 'til my hurse lay, right
Nigga, know about Illuminati and they new world order
Nigga, Mo Thug finest runnin' through the mind
And, nigga don't pint the science behind the violence
Call me that mighty rebel makin' moves in silence
Livin' life timeless
Nigga, I be constantly rollin' with the devil on every level
It's a battle war ain't nothin' but a cosmic law
Competition and money to keep the shit raw
Rich stay rich and the poor take off
My nigga, it's the '99
Niggas is out here dyin' getttin' down for they crime
Crime suspect on the string like a puppet, warriors on the frontline
Sometimes it'll make a real thug nigga wonder how we don't go under
Livin' in the last days
I be killin' tryin' to get that million
Better be lucky this mothaf*ckin rap pays
What'cho gonna do when it come for you?
I'ma tell you right now what my thugs gon' do
We gon' lace our boots, and stand ready to shoot
Kill up all them mothaf*ckin' boys in blue
No reguards for authorities
Try to dump a nigga up with the Thorazine
You invited to the bloody, bloody horror scene
Know what I mean see you ain't on my team
Nigga, if you sets then mark the target
Who the f*ck you think they huantin'?
Make a mothaf*cka think dauntin'
Truely yours, America's most wanted

[Chorus x4]
Nigga, it's all about the drama
Packin' pistols when we ride
Mothaf*ckas about to die
It's about to be some shit!

[L-Burna]
Nigga, since I started this shit
Then I'ma finish this shit
Real St. Clair niggas up in this bitch
Bustin' round after round 'til I empty the clip
I do my dirty and dip, so don't trip, and I flip
Musta been the cause for the action
Reason why a mothaf*cka had to get checked
Nigga, when I step on the set
Then i'll be willing to bet
It's going down in the name of threat
This isn't a promise
I'm the bombest mothaf*ckin' nigga that you gotta compete with
It ain't no secret to our freaky
Keep this raw, uncut for the streets shit
Peep this game from the nigga from Cleveland
Been around the globe
Did a few shows, and I f*cked a few ho's
Made a lotta dough, and I'm itchin' for mo'
So, too many niggas be envious Wanna hate on the nigga with the benjamins
Tryin' to plot on another nigga dividends
Though the life we live gets strenuous
And we gettin' it how me and my niggas
We outrang hustlas, thug by nature
It's all about paper, f*ck these haters
Everytime a nigga makes moves, it's major
Pager blowin' up, and nigga my celly off the hinges
Mo' money, mo' money, mo' business
Rollin' in Bentlys, Jags and Benzs
Nigga for the two triple zero, represent new millenium heros
And just like Bone Thug rolls
Little Lay gon' keep on kickin' in doors

[Chorus x4]
Nigga, it's all about the drama
Packin' pistols when we ride
Mothaf*ckas about to die
It's about to be some shit!

[L-Burna]
My stuff is in motion, lock and load
Nigga better tell 'em 'bout the gunline, boss
Cause nigga, you cross it, you leakin' like a faucet
Remember we take no shorts or no losses
Play a nigga hard
Cause we're marchin' through the darkness
Could it be the light at the end of the tunnel?
Plus we animals in this jungle
Prayin' on the victims, livin' life gung-ho
I don't know, and Layzie don't give a f*ck
Platinum nigga, and I still'll bust
While I'm here, nigga I'm gon' live it up
Keep puttin' this down and won't give it up
Is it real or what?
Why you wanna judge me?
Nigga better mind his perogitives
So you gotta give, takin' hostages
Ain't none of y'all mothaf*ckas gotta live
Whatever plot this is I'm playin' my role
Told you before ain't no bitch in my song
Did I mention I roll with the uzi
I bet you got instruments, just click on you ho's
Bombin' on you fake niggas
How much of this bullshit you willin' to take, nigga?
Say we eliminate and we erase these niggas
Weed out these niggas, and break these niggas
Y'all ready for the thug world order?
I'm ready to ride
Nigga, lets do this
For the Mo Thug, 7th Sign, Thugline
For the love of Eazy, it's Ruthless
And the truth is nigga, we run this thang
Nigga better duck when the gun go bang
Forever i'll be thuggin' for the love of the game
And it ain't gon' change
Nigga, lets go hang 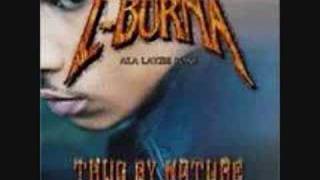