No One Would Notice If You Died Lyrics

No One Would Notice If You Died Lyrics


'Why don't you smile?' she asked. 'I'll smile when you're dead' I answered, and
I wasn't lying either, the image of her head caved in from being repeatedly
Slammed into the asphalt would of brought a huge grin to my face and give me
That look that people say I get when I just did something really f*cking mean...
She leaned in closer, to my disgust. 'And who the f*ck do you think you are,
Talking to me like that?' she drunkenly slurred, to which I deadpanned 'Someone
Who doesn't suck cock for a living'. At that moment I thought to myself that no
One would ever notice if she died, this street walking whore obviously had no
Family that cared about her, even her so-called ''clients'' wouldn't miss her
As some younger, probably slightly-less disease ridden prostitute would take
Her place within minutes. I wouldn't even be the aggressor in this, she's the One who launched an all-out assault on all my senses, her putrid odor of stale
Cigarettes and dried cum digging so far up my nostrils that I can taste it in
My mouth, something I could of went my whole life without experiencing, her
Grating, nasal voice making the verbal diarrhea spewing from her probably most
Prolific money-making orifices even more aggravating to match her nauseating,
Unkempt appearance, yet she'd probably be even uglier had she showered in the
Last month and let her ugliness be fully exposed from under the dirt and scum
She is now thankfully covered in... now this has to be considered self defense!
In degrading herself to the point of swallowing cum as a means for financial
Survival, she has now become the perfect victim, to a point where it just
Takes all the fun out of it 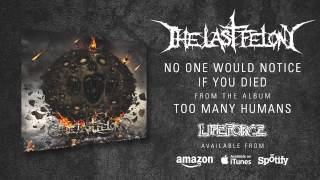 check amazon for No One Would Notice If You Died mp3 download
these lyrics are submitted by BURKUL4
browse other artists under L:L2L3L4L5L6L7L8
Songwriter(s): seb painchaud, the last felony
Record Label(s): 2010 Lifeforce Records
Official lyrics by