THE JOURNALIST: Again, I was on my way back to London -
through towns and villages that were blackened ruins,
totally silent, desolated, deserted. Man's empire had
passed away, taken swiftly and without error by these
creatures who were composed entirely of brain.

Unhampered by the complex systems that make up man, they made and used different bodies according to their needs.
They never tired, never slept, and never suffered, having
long since eliminated from their planet the bacteria
which cause all fevers and other morbidities 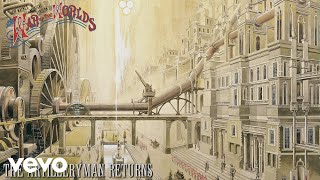