The Journalist: The steamer began to move slowly away,
but on the landward horizon appeared the silhouette of
a fighting machine. Another came. And another. Striding
over hills and trees, plunging far out to sea and
blocking the exit of the steamer. Between them, lay the
silent, grey ironclad, Thunderchild. Slowly it moved
towards shore then, with a deafening roar and whoosh of
spray, it swung about and drove at full speed towards
the waiting Martians.

People: There were ships of shapes and sizes,
Scattered out along the bay,
and I thought I heard her calling,
As the steamer pulled away,
The invaders must have seen them,
As across the coast they filed,
Standin' firm between them,
There lay Thunder Child!

Moving swiftly through the waters,
Cannons blazing as she came,
Brought a mighty metal warlord,
CRASHING down in sheets of flame,
Sensing victory was nearing,
Thinkin' fortune must have smiled,
People started cheering,
"Come on Thunderchild!"
"Come on thunderchi hi i-i-ild" The Journalist: The Martians released their black
smoke, but the ship sped on, cutting down one of the
tripod figures. Instantly, the others raised their heat
rays, and melted the Thunderchild's valiant heart.

The Journalist: When the smoke cleared, the little
steamer had reached the misty horizon and Carrie was
safe. But the Thunderchild had vanished forever, taking
with her Man's last hope for victory. The leaden sky
was lit by green flashes, cylinder following cylinder,
and noone and nothing was left now to fight them. The
Earth belonged to the Martians. 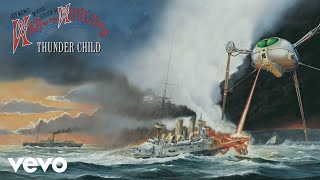