The Artilleryman And The Fighting Machine Lyrics

The Artilleryman And The Fighting Machine Lyrics


The hammering from the pit and the pounding of guns
grew louder. My fear rose at the sound of someone
creeping into the house. Then I saw it was a young
artilleryman, weary, streaked with blood and dirt.

London! Carrie! I hadn't dreamed there could be danger
to Carrie and her father, so many miles away.

Journalist: I must go to London at once.
Artilleryman: And me, got to report to headquarters, if
there's anything left of it.

At Byfleet, we came upon an inn, but it was deserted.

Artilleryman: Is everybody dead?
Journalist: Not everybody, look...

Six cannons with gunners standing by.

Artilleryman: Bows and arrows against the lightning.
Journalist: Hmm.
Artilleryman: They haven't seen the heat ray yet.

We hurried along the road to Weybridge.
Suddenly, there was a heavy explosion.
The ground heaved, windows shattered and gusts of smoke erupted into the air.

Artilleryman: Look! There they are! What did I tell
you! Quickly, one after the other, four of the fighting
machines appeared. Monstrous tripods, higher than the
tallest steeple, striding over the pine trees and
smashing them, walking tripods of glittering metal.
Each carried a huge funnel and I realized with horror
that I'd seen this awful thing before

A fifth Machine appeared on the far bank. It raised
itself to full height, flourished the
funnel high in the air - and the ghostly, terrible Heat
Ray struck the town.

JOURNALIST: As it struck, all five Fighting Machines
exulted, emitting deafening howls
which roared like thunder.

JOURNALIST: The six guns we had seen now fired
simultaneously,
decapitating a Fighting Machine. The Martian inside the
hood was slain, splashed to
the four winds, and the body, nothing now but an
intricate device of metal, went
whirling to destruction. As the other Monsters
advanced, people ran away blindly, the
Artilleryman among them, but I jumped into the water
and hid until forced up to
breathe. Now the guns spoke again, but this time the
Heat Ray sent them to oblivion.

JOURNALIST: With a white flash, the Heat Ray swept
across the river. Scalded, half-
blinded and agonized, I staggered through leaping,
hissing water towards the shore. I fell
helplessly, in full sight of the Martians, expecting
nothing but death. The foot of a
Fighting Machine came down close to my head, then
lifted again, as the four Martians
carried away the debris of their fallen comrade... and
I realized that by a miracle , I had
escaped. 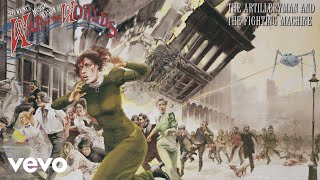