You do your first bid and dirt to get your name known
You never talk too much to get your spot blown
Now you're no longer just a face in the crowd
You're gettin so much respect that niggaz might as well bow
And movin up with your hustle like you planned it
Rakin dough like the world's greatest bandit
Always got one eye open, for the stick-up kids postin
So much cream chumps they can't understand it
Ladies flock to your jock like it's golden
Curious, to test the weight you be holdin
but you ain't got no time, to be chasin felines
If she's the chick that you pick then she gets chosen
People treat you like you're ghetto royalty
And all your staff shows you utmost loyalty
You paid your dues, refuse to lose in this scenario
The rep grows bigga, you're a legend and a hero

Your fame has gotten larger than your life
You've got a harem of bitches and killer niggaz that's hype
They got your back, but you so fly you don't need em
You shit what you're eatin so you don't peep the proceedings
They start schemeing, feeling that you're too swollen
and that's the reason why your cash and stash gets stolen
You start perspiring, because you're paranoid
Still another confrontation that you couldn't avoid Prepare for drama, as if you were a stunt man
Back in the days you was a forty and a blunt man
Today you're a Willie, now the weather's too chilly
New York City ain't the place to be frontin
Over your shoulders day and night's where you look
Your so-called fam ran a scam, and you got shook
Go back to square one, better go talk to your son
See reps grow bigga in the life of a crook

Years ago, we were new jacks to this scene
Showed some effort, made fat records, but still saw no green
Know what I mean? They tried to stifle us
Nigga you could not believe how really ill and trife it was
Fed up so we headed on a serious mission
Wishin, that we could better our position
Two businessmen, Guru and Prim', we enterprised
Too strong to be stepped on, creatively wise
The dedicated ministers of underground sound
When we're doin our thing, you know we don't f*ck around
No matter how bizarre and different you think you are
your team wouldn't dream of competeing with GangStarr
Premier in the rear with the beats and cuts
And Guru with the mic ready to tear shit up
Take us out the game nigga? How you figure?
The name is well kept, and the rep just gets bigga 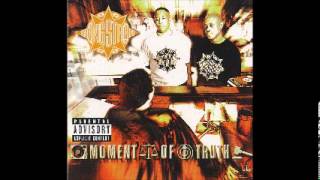