It's '89, mine, I'm Keithy E. the Guru
Premier is here with the flair, we're running to you
Bust your grill with skill, as we build and fulfill
I drop the wisom to quiz them, with precision we drill
We're kicking wannabes down cause we're gonna be down
We're moving on with the sound, see we're gonna be around
For a long time, I kick the strong rhymes
You're empty-handed and stranded cause you were standing in the wrong line
This is not the fate is for sure a pure pen
The gift is hitting home on your dome because we meant it
You'll need a graffiti, don't heed and you'll be bleeding
We'll rip you, and ship you back and you'll be repeating
The progress, and I guess that you should be told now
Lo and behold how the stroll I unfold now
Knowledge, wisdom, and peace are what I'm true to
In the rear is Premier, and I'm the Guru

I sound greater because I'm head of the comittee
I chill in New York City, I'm witty, so get me
To Brooklyn, so I can ill and peace no joke
You slow poke, you'll go broke, you're rhymes ain't all that dope
So take a backseat, with all your wack beats
This is the one phase of my rage and onstage I slap eats For you to try to steal this, I will reveal this
Like a prophet, I'll drop it, Premier will start to seal
This coffin to be chewing, you soft and you'll be doing
A dance with some ants in the ground, you clowns be chewing
But you could never get this, the talents we've been blest with
So many different ways to phrase, you shouldn't mess with the Guru

So here's the verdict, cause all you suckers know you're booty
You're played out, you'll fade out, I doubt that you can do me
We ain't having no gabbing, when I be grabbing and jabbing
In your ear like a spear prepare your body for battling
Cause you've been preparing to move, you'll be certain to lose
Open your eyes up, wise up while I work with the groove
To teach your next school, who'll be the next fool?
That I can stomp down with compound nouns but like a pestule
Come back with dumb raps, then like a tech inside
I'll take you out your misery you ought to step aside
Your weak rap, you speak that yang so Imma clue you
The DJ's name is Premier, and I'm the Guru 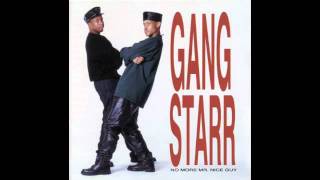