[Verse 1]
Think a boy wanna act like he from the Hamptons
Straighten me locks man I'm Samson
Strength in the squad don't forget about the mandem
Say you're from Toronto but there's nothing wrong with Brampton
Lookin for a hand out
We all know why your hands in
Wake up every day like I'm becoming who I want to be
Found the right ting so I ain't stressin' about monogamy
Lifes a f*ckin game, I ain't down for this monopoly
Burned a lot of bridges nigga, I ain't down to squash b
Look me in the motherf*ckin eyes when you talk to me
And you can't even talk to me if you ain't on your socrates
Heard you wanna kick it nigga I ain't on your soccer team Niggas shit talking now-a-day it just exhaust for me
Pick your poison, pick a pot to piss in got a pot to pee [?]
Peter piper picked some acid found a new philosophy
I'm a real nigga I became who you forgot to be
Heard you died nigga real talk you are not to me
You follow every move
Monkey see Monkey do
If I don't make a move, they don't know what to do
I needed some time to get my mind together
Found it now I'm feeling better
Saw a fan, signed her sweater
Rainin on a nigga parade but I don't mind the weather
Saw your girl, guess she's alright, but trust me mine is wetter
All you gotta do is stay true to yourself
Weed on the floor, got shrooms on the shelf 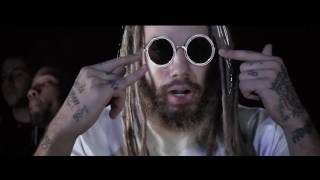