[Intro]
Griselda, we where the smoke at, ay
Facts, nigga
I told him, I said, “West, call me when you want the dirty work done”
Feeling hot already
Yo, let's go, look, yo

[Verse 1]
I got a large bag of clips, hard hats, and sticks
My squad tagging shit, y'all catch attempts
You leave the house, have some sense, nigga, grab the blick
My lil homie left without it and I ain't get to dap him since
My slime think we homies so he call me Bloody
It's a blessing when your plug let you short him 20
On parole, I was going all in with ten
These funny hustlers out here owing more than they spend
She f*ck with you, you buy her a Chanel watch
She fly out with twelve blocks, I buy her a nail shop
I listened to the lies in their lines that they tell, shocked
Six months before I signed, had a pie in the mailbox
I heard they sick about me rapping ‘bout the drugs I stretch
I'ma write a whole album ‘bout the plugs I met
Uh, my dog came home, we told him, “Welcome back”
First day out, bought a .40 and a Griselda tag
I don't got no new friends, that's how you get loose ends
I need that Benz truck, yeah, that great white with two fins
Major deal for what? Uh, that's gon' cost him two Ms
Truth is, I'ma clear a half a million before New Years
These lil niggas satisfied with BAPE outfits
I need a Wraith out it, big shit, lake houses
I'm talking condos just for safe houses, Space Mountain
I'm tryna see so much bread, I gotta take counselling
Y'all like these rappers, but I don't find it amusing, no I don't buy they movement, so I don't buy their music
I wrote get rich manuals where I provide the blueprint
And with pride, I preach this new shit, just like I'm inside a pulpit
Top of the year, I came and woke these niggas up
Made they names sound different when I spoke these niggas up
I stay hungry just laying my hustle down
Ain't no f*cking around with Benny and Uncle Al
Griselda, the Butcher coming, nigga

[Verse 2]
In this game, you take some losses, I was straight, I ate with bosses
On my plate, that yay was flawless, we out in Vegas racing Porsches
My dawgs laid in coffins, one died in a shootout
No bullets left, he got slept tryna change his cartridge
Caught my nephew with some work, I guess he caught himself trapping with it
I said, “Just know the consequences if they catch you with it
Nah, I ain't mad you dealing, hit me, I send it at you, nigga
And show you how to ship it with bubble wrap and a vacuum sealer”
The Butcher coming, y'all know the motto
Those Sopranos had fiends smoking white out Sprite soda bottles
Mob boss like I'm Joe Todaro
My dollars long and my plug got a farm like he Old MacDonald
I'm the boss, so where they go, they follow
It's penalties for touching me, so just be careful where you throw them hollows
I sold dope like it was no tomorrow
That got me cash and my watch glass like it's made of broken bottles 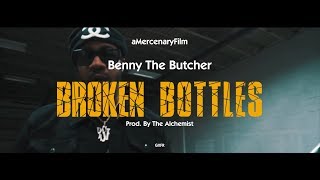