[Intro: Benny the Butcher]
Let's go
Hah, let's go
You know what this is
The Butcher comin', nigga
Ay, look

[Verse 1: Benny the Butcher & Pusha T]
We don't do no price talk 'cause I already know they numbers
Plus me and your old connect was tighter than them Dolce runners
First time I ever cooked a deuce, I got a four-way from it
Stabbed it in the pot so many times they think OJ done it
If me and Push would've linked back when I was a dealer
That's an 18-wheeler to my town from Virginia
Enough glitter on my neck that make my ex-bitch bitter
I pulled up to the 'jects pushin' the Lex' like I'm Jigga, uh
To really make these type of checks, I took my chances
When I was travelin' without no license, yes, I really took those type of risks
I'm laughin' at indictment threats, huh, I used to sell Os
But now I outsell shows, to the feds, the trail cold
When I was locked, never called, but I used to send mail home
I got close homies that caught new cases on jail phones
Velcro strap the clip, got a curve like a elbow
She countin' up, when the bitch got the 50, her nail broke
They talkin' racks, but my plug bring it back on the sailboat, uh
And I flooded my corner right after the scale broke
That's your bitch, but I'm not a nigga she tell no (Yeah) 'Cause you got the bitch fly, but it wasn't Chanel though

[Verse 2: Pusha T]
I'm nothin' like you new gangsters, pointin' guns at the camera (Never)
I bet you niggas practice in the mirror, brick of money to your earlobe
Six pics, same brick, somethin' weird though
They say a hero's nothin' but a sandwich
The 488 comin' through like the prayin' mantis
My bitches got standards
It's fair in love and war, it's okay to f*ck a scammer
As long as he empty the bag like black Santa
Steak dinners at Dan Tana's, pick a Tamara
The purple in my rainbow is amethyst
Only I can coke rap this glamorous
The only drug dealer out at Fashion Week
With an 80/20 split like Master P
Why would I ever 50/50? You ain't half of me
Benny the Butcher comin' after me, Push 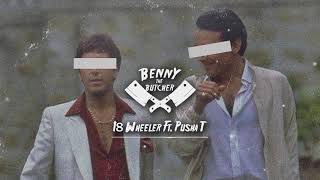