It doesn't take long for the nightmarish news
To sweep the world like a shock wave
The mighty Man of Steel, once the super champion, admired by billions
Has proclaimed himself a wildman
Afraid of going on an uncontrollable rampage at any moment

Hey yo stupid, you thought I was over
Living like Oscar, Big Bird and Grover
I'm the X the man the first challenger
I keep rhymes in place like Bob Gallagher

I just pedal my bike, then I laugh again
I pull the girls with thread and one string
They say I'm steppin' to them for one thing
But I don't think so, you think so, really?
Tapes is wack and new MC's sound silly

I hate to criticize, I have a problem
In this school wack rappers I'll solve them
They wanna be like Ultra on the jizock Try to act like they not but on the kizock

Suckin', takin', aw-ll be slurpin'
Comical bums your wack jams ain't workin'
You ain't got the style to rock no man
You get a pound from me, but with no hand

Diss 'em, I'm not the one Miss Ferguson
Cold stupid as hell like George Jefferson
Yeah, you dummies better be careful
I pick up rappers and throw away a handful
Yes I'm

Twinkle twinkle twinkle little star
Behind those glasses I know who you are
You Racer X, here's brother speed
You dissin' James? He's chicken feed

He can't rap or clap or make a feet tap
How 'bout Monie and Nikki they both bullcrap
I see light in my lamp, but not on the mic
How could
Explain lyrics
Correct lyrics 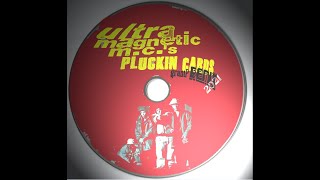