[Kool Keith]
With a ? aligned fade, Technic 1200's
are combined to rotate, swiftly left to right
On the mix, Red Alert, controlled by gamma light
Ninety-eight point seven, KISS upon the label
of the record that he's holding beside a wooden table
I am able to MC, by testing musically
through a caliber of rhymes arranged and wrote by me
As an artist and composer, the style I have supposed to be
made for soft ducks and pushed by bulldogs
Step to the side words glide, for me and then collide
like a demolition derby, punks I will be smashin
With a sign to amuse, words will keep on crashin
Very hazardous vocab, impeachin Kool Keith
Givin bait!

[Ced Gee]
Now with the temperature rising, the beat, is just driving
The wizard on the mic, is fully emphasizing
Red Alert, goes bezerk, make you jump and jerk
Hydroplayin relayin decayin, and it work
Every second captivating, your mind, body and soul
As the chairman of the board, hip-hop, and just totally
set to protect, send right, or do reset
every sucker in the way, no stoppin East and West
Best gradius remains, with more, I have a fade
that'll stay to amaze, for weeks, and many days
on the mic I'm always ready, my job, is set to stay
For the Ultramagnetic, Ced Gee, I devestate With Moe Love and Kool Keith, we stop, annihilate
and give you bait!

[Kool Keith]
Well I'm fresh out the pack, back to let you know
When the light turn green it's time for Red to go
On the mix to advance, reachin higher levels
Through his books of magic cool, the wizard of tricks
Red Alert's non-stop, while heads stop to bop
to the beat you will listen, turn the dial to KISS
Cause I'm steady beatin toys, ballin up my fists
Punchin every MC, directly in the brain
I'm killing, willing scheme and just chilling
like a mad scientist to punks I will be ILLING!
MUTILATING! More out of turn
Choppin up every germ, I'm the wizard Kool Keith
givin bait!

[Ced Gee]
Real.. lousy competition, a task, to ignore
Incantation to the norm, affecting attitude
While we rising through creating, thoughts or premonitions
which allows conversation, between the controls
Stimulating Ultra drive, is boosted to the max
as my lyrics blow your BRAINS, you can't
comprehend the formulas, expressed, to relate
and vexed, scientific, form, to create
parallel philosophies, UNIVERSAL QUESTIONS
In a second you fester and learnin, new lessons
from the wizard scientist, known as Ced Gee
Takin time to dictate, to judge, affiliate
and give you bait! 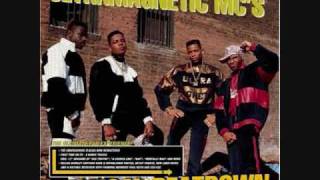