{all samples cut by Moe Luv are from Star Wars}

[Kool Keith]
I got a radio, small and yet portable
Comfortable, with the sound in audio
Kickin, high hats just tickin
Spicy lyrics, and words finger lickin.. good
But you know I could
Beat on steel, break tons of wood.. down
with a funky sound
Square mixer, the record is round
and turning, for the million I'm earning
Shock the rhythm, and just keep learning
this, that is supposed to
Grab your ear, and have it move close
to the speakers, so you hear me clearly
I'm out yes, to damage severely
You're very far, and not yet nearly
expressing them, but you're messing them up
Your bummy rhymes, I'm dressing them up
for the battle win, like a snake I'm rattlin
The red ball with the wooden piece paddlin
MC's, stop the perpetrating
And step off, release the mic and Break North
North North North

[Ced Gee]
I'm like a merchandise, a customized item
Computer rapper for ducks who wanna bite em
Stand back, watch the man recite em
It took a minute a second for me to write em
and type em and hype em and psych em, up
Change my rhythm, before I get stuck
in an altitude, beyond my own level
I smack rappers, and send em to the devil
on a bus, return em to dust
I start infections, reduce em to pus I'm on that scanner, and brains I blow out
To old bones, and skulls I throw out
to the backyard, and yes the wackyard
You need a pipe, there's the old crackyard
Your last stop, it has to be the graveyard
Peakin, Ced Gee I'm speakin
I smell smoke, my tonsils are leakin
words, in the right direction
Add the beats with the lyrics perfection
Stompin, the bass and highs, Break North

[Kool Keith]
Well I'm rocks, like a chain to a link
I wear black while suckers wear pink
Now think, about my capital law
I break domes, and speak in the raw
I'm iller, a South Bronx killer
I chop rappers, and throw em in the river
Tastin, as I swallow your liver
Here's your brain for your girl I can give her
messages, clues from a murderer
And if she's ugly, I never even heard of her
telling, bugging detectives
I wear a bag, four contraceptives
and aluminum, wrapped in all foil
I play a game, slick to be oil
for the other roaches, MC's I boil
and roast, mega degrees
I swarm around with a thousand of bees
Absorb earth and the honey from trees
I'm the King Bee, my girl's the Queen Bee
And when you're stung, you never even seen me
vanish, Kool Keith here to damage, Break North
North, North, North

Yeah, y'all better be ready for some guerilla warfare 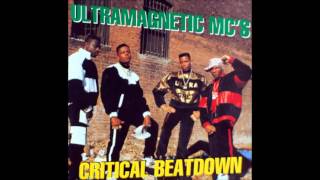