I got a flier in my hand, Bambaataa with Cold Crush
The place is packed, with Johnny Wa and Rayon
Lovely ladies smellin' sweet, with a lot of Avon
Jazzy Jay by my side, Charlie Chase behind me

Flash and Theodore, super cuts that blind me
Catch a Groove is the rhythm, spinnin' back and forth
From the East and the Valley, swingin' back up North
Towards the South Bronx, Euceda Park and Webster

The speakers are pumpin', power bass is thumpin'
With the Ultra mega amp, keepin' pep up, jumpin'
From side to side, the double meters will peak
They had some good MC's, a lot of them, they was weak

They no style with no metaphor, no voice to speak
Melle Mel had the best rhymes, rankin' with Caz
Kool Moe tried to get down but I made him sit down
With that metaphor quickness, you bite and you bit this

And under your arms you're kickin' power and musty
Get out of my way, and let the rhythm path roll
Let me run up the charts, freak a rhyme turn gold
While you're listenin', I throw a buzz in your ear
Bust the facts

Now swing your partner around, dosey-dosey
Like musical chairs and ring around the Rosie
The party you pace see, Kool Herc with J.C.
The Herculoids battle, The Disco Twins

Funky rhymes with break beats, the DJ spins
For the L Brothers, steppin' right in the scene
Mean Gene was maxin', Rockin' Rob went to work
While the tables would turn, the old needles used to jerk

With the belt drive, Technics and B-1's
With the orange light shinin', the red on D-1's
Direct drive and Nova, I'm chillin' with G.L.O.B.E.
Mr. Biggs and Pow-Wow, Monk and Superman

Pullin' out that Olde E, that funky funky 40 ounce
Ikey C from Cosmic, the bass bottom bounce
Red Alert in the booth, the T-Connection to mix Silly rabbit you know my style has Trix

To go on, to the next line, to the break of dawn
While I move up step, to the early early morn
With a hip-hop drink and some rhyme popcorn
Never smokin' or sniffin' or ever jokin' or riffin'

Because it's time to plex more, and rhyme fantastic
Donald Rock and Whipper Whip, neither rapper was plastic
Back in the days, you had to be so sarcastic
To stretch out a rhyme and make it double elastic

You learn new jack, step back and be wack
You know what time it is boy and every mic I smoke
Bust the facts

Later on at the Boys Club, while Tom excel
I got a name for your brain that surely rings a bell
Patti Duke had the nice hands, swift with Billy Boy
Playin' James Brown records, you stupid you silly boy

Bongo Rockin', hard where the rhythm go
You fake and pass, Busy Bee give and go
To the AJ Scratch, a funky beat that matched
With a two-second break, that was hard to catch

DST was mixin', slicin' with his elbows
Freakin' the wheels, loopin' rhymes, here we go
To the master faster, speed up and go faster
Turn my JVC to mega power and blast the

Mario tape, yes The Disco King
With the b-side The Funky Drums, no new jack swing
Happy rappers with polka dots, were bound to get stuck
You had the Zulus the Nine crew, you're pushin' your luck

The Casanovas was maxin' all scheamin' to duck
You had The Black Spades, plus The Savage Skulls
Gang bangin' was over, neither crew is exist
They got a job and a wife, a pretty woman to kiss

So on the rhymes kept rollin', straight up into disco
Eddie Chiba was sweet G and back up to Cisko
And freakier Islam, with the Great Love Squids
Spinnin' high-top beats, can you check it, you dig
Kool Keith out smokin', my lyrics are hot
Bust the facts 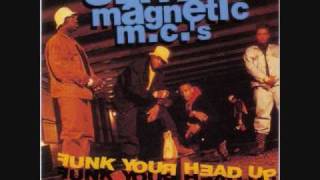