[Kool Keith]
Yes indeed one time
This is for all you stupid niggaz out there
talkin that dumb doo doo weak shit
We comin live and direct
Straight in your motherf*ckin face with some pure raw shit
And we gon' get busy, like this

It's been a while, since I seen a good street fight
A good fight, throwin fist to fist
Blow for blow, toe for toe, yeah
Put your gun down, and give a brother a fair fight
Smitty with a left jab, no AK
Automatic pistol, put it the hell away
Bring out a baseball bat for your black ass
Cincinatti, beatin down on Oakland
But I'll be the referee, while nose get broken
and basket broken, and brains get beat down
Bronx style, buckwild, nobody should jump in
Just stand the hell way back, before you get slapped back
No posse to run back, the gangsta hard talk
Braggin on the mic, you shootin cops
But when you in a cell, shootin stops
Look at the murderers, third degree psychos
Waitin to get hanged, and next on death row
Behind the steel bars, you're froze and can't throw
But back on the streets with a tool you are still hard
Callin yourself God, and hangin with bodyguards
But look at the snitch, your whole face is scarred
Go 4 Yourz Chorus: Tim Dog (repeat 3X)

[Ced Gee]
Yo listen up, a lot of rappers wanna be hard
Walkin around with fifty-seven bodyguards
Armed with guns, crazy automatics
Wearin black, but they're faggots
Cause when the Gods are gone, and the guns are gone
and they're one on one with someone
Time to put the fist up straight into action
Blow for blow for real satisfaction
Hit the deck the results are fatal
They can't throw cause they're not able
to kick out a left hook and follow with the overhand, left
but duck cause you'll miss he'll land, a bomb
and put you on the canvas
You wish your boys were there but they're in Kansas
+Back on the Block+ like Quincy Jones makin cash
While you're on the road, goin out like a jackass
So when you're out there, perpetratin fantasies
You need to stop it, and face reality
And grow up like a man who understands
Be yourself, never give a damn
about who accepts you, because it's only you
who choose.. 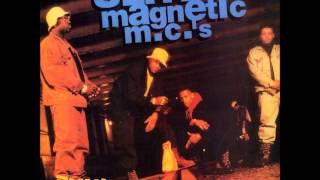