[Intro]
Do you hear it?
Hear it? Yes!
Night after night!

[Verse 1]
Tell me what you ran for (skrr)
Then why you tell these people you a man fo'? (psh)
With a bandana same color as Rambo
I unload and never run out of ammo
Elevate
Welcome to the haunted, let's get up on it
You told me you want it you better come into the murder section
Put one in your tummy, I'm lookin' bummy
But you never saw me, I disappear like the murder weapon
Wake up in the night, it's only begun
Tryna figure out who I'mma get some more weed from
Try to hit my auntie, but they warn me that she spun
Poppin' all you niggas like a muthaf*ckin' rerun
I be on a different planet with the apes, I got nothin' to lose
Wanna go against the grain then I'm comin' for you
Said they gonna come for me, now I'm really amused
Murder menace, I be at it, you lit up my fuse
Bring you on into the haunted
It's really not what you wanted
I got em all feelin' done and
They comment but I be on it
They rush in to be confronted
I lit 'em up like a comet
I'm sick and I'm spitting vomit
It's murder when I be poppin'
They sleepin' when I'm comin' down the hallway (deep)
Never turn one down, I'm takin' all fades (woo)
Blowin' on my green talkin' all days
When they ask me if I'm rappin' still tell 'em always
Brain muthaf*cka

[Verse 2]
I told you it was man down
Baby, won't you tell me who's the man now
Bitches always comin' with they hand out
Dick is swell up in they p*ssy like it's sand now (uh yeah)
Rappers say they want it till they feel the venom
I disappeared a couple years but now it's time to get 'em
I reappear the fearest just to lay up in 'em
I got 'em droppin' doodoo all up in they denim
Runnin' 'round the niggas, I be at 'em with the semiautomatic roastin' shit
We can take it to the backyard when you act hard, gotta hold this shit
Loadin' clips just in case you niggas thinkin' that you holdin' this
Sit up in the corner lookin' at me with a mean mug, I notice this
Ferociousness
All in with the what's up
Make niggas all go upchuck when I pull out with the buck buck
Guts cut
That's the time they realized they f*cked up (oh shit)
They try, but I'm nice with the run up 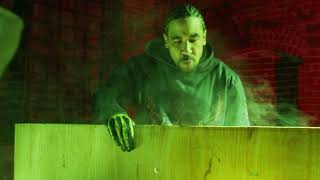