You would think I was dreamin'
But I wasn't sleeping
Bitch and my dealer was creepin'
Handle the pump if anyone want the funk open the trunk and jump in the deep end
Motivated by the, Pistol, money, and p*ssy
Feelin' the cap and it's foggy
Kill 'em all up, Fill 'em all up
Middle of the night
So nobody saw me
Gotta' be evasive
Shoot niggas in faces
Stickin' their boyfriends in cases
Teach 'em the basis
Cause I bet there's somebody that'll blow your noodle for laces
How many smelt it?
The body up in the next room been dead for weeks
But how many felt it?
The feeling that somebody's backin' up outta their sleep
I am the phenom
Mercal Fur
Sick up on the block
You don't really wanna' be the motherf*cka' all up in my face before you get erased like chalk
And that was my venom
Chew niggas like gremlins
Put 'em in the pot with the noodles
And a bullet through the knee'll rip a nigga a brand new asshole
(The whole kit and kaboodle)
You niggas is poodles
And me and my niggas be only for other people, (Fools)
Gangbangin' on google?
You niggas are killin' me
Fillin' you up with the tools

-Yeah it was the millimeter of the loaded gun
They don't wanna' be the reason a nigga wasn't breathin' when the blood hit the tip of his lung
Poppin' at a motherf*cka' like a nigga was a nothin' in the middle of the street
He was losin'
His life, his mom, his wife, his rhymes
He fights these niggas instead of constantly choosin'
(I was just bruisin')
Feelin' like David Palmer, (Reference to the the show 24) Hit 'em with a millimeter, look around the corner, poppin' off in California like the nigga was Dahmer
Hit 'em all up but be careful 'cuz you ain't the only nigga who is psycho
Layin' in the middle of the street dead
With your family yelling "Michael!"
How many give 'em abusive
Thinking I'll give 'em a bit of this music
Sit up and listen to my shit for days
While you just sippin' up off of the fluid
Then you proceed to pick up the grenades
And get to bustin' away at the buick
Some niggas just wanna' get paid
But they never even do shit
Wake up the monster
Up in the dark
Wandered off with the devil himself
I'm going bazonkers
Creepin' through blocks in the night, watchin' out for my health

Does anybody even listen to me when I speak?
Nobody believes me
I'm sick of these niggas sittin' in the dark gettin' geeked
Just up in the club
Forty, me, and my nuts
Posted up and we deep in the tomb
Ken?, Ryu?, Blanca? Guile?
Hit 'em with a sonic boom, (Street Fighter reference)
Think about life in a blacked out room
With no kinda' weed or rolled swisher to burn
Her mom and her sister can both be deaf as far as I'm concerned
(It is now my turn) 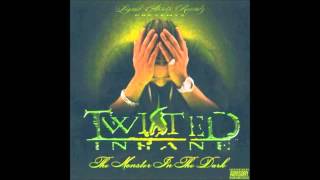