Whatever Became Of Hubert Lyrics

Whatever Became Of Hubert Lyrics


I wonder how many people here tonight remember Hubert
Humphrey. He used to be a senator. From time to time
you read something about him pinning a medal on
somebody or making a speech, or every now and then you
read something in one of those Where Are They Now?
columns. Whatever became of Deanna Durbin and Hubert
Humphrey and so on. This became quite an issue last
winter at the time of Winston Churchill's funeral when
President Johnson was too ill to go and somebody
suggested that he send Hubert and he said "Hubert who?"
And all America was singing...

Whatever became of Hubert?
Has anyone heard a thing?
Once he shone on his own,
Now he sits home alone, And waits for the phone to ring.

Once a fiery liberal spirit,
Ah, but now when he speaks he must clear it.
Second fiddle's a hard part, I know,
When they don't even give you a bow.

"We must protest his treatment," Hubert,
Says each newspaper reader.
As someone remarked to Schubert,
"Take us to your Lieder."

Whatever became of Hubert?
We miss you, so tell us please.
Are you sad? Are you cross? Are you gathering moss
While you wait for the boss to sneeze?

Does Lyndon, recalling when he was VP,
Say, "I'll do unto you like they did unto me?"
Do you dream about staging a coup?
Hubert, what happened to you? 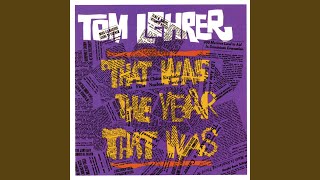 check amazon for Whatever Became Of Hubert mp3 download
these lyrics are submitted by kaan
browse other artists under T:T2T3T4
Record Label(s): (C) 1965 Tom Lehrer under license to Shout Factory LLC, 2042 A Armacost Ave , Los Angeles, CA 90025 All Rights Reserved
Official lyrics by