[Chorus]
And the tourists say
"Please give me the directions to the Hollywood sign
I always dreamt of coming here to see the Hollywood sign"
But on their way back down we'll ask
"Did you have a good time?"
They'll say "it's just some f*ckin' letters on a hill"

[Chorus]
And the studio executives who never made a thing
Blaming other for their failures, taking credit for their wins
Wiping the blood of dumb artists from their chins
Singing, "kid you oughtn't take it personally"

[Bridge]
On Hollywood and Vine a dime-store Spider-Man
Shouting at a stoned Emma Stone, dressed à la La La Land And in the distance, in both its glorious dimensions
The sign projects its shadow on the hill

[Verse 3]
Rushing by machine-gunned cops at LAX
Malfunctioning departure board says we're boarding next
Belt off, shoes off, jacket off, hat
Don't need the attitude, but I quite enjoy the subsequent pat-down
And I'm sat down
As the A380 engine roars
Pushed backwards as this tube of monkeys rumbles forwards 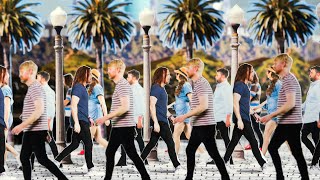