Inner North London, top floor flat
All white walls, white carpet, white cat,
Rice Paper partitions, modern art and ambition
The host's a physician,
Bright bloke, has his own practice
His girlfriend's an actress, an old mate of ours from home
And they're always great fun, so to dinner we've come.

The 5th guest is an unknown,
The hosts have just thrown us together for a favour 'cause this girl's just arrived from Australia
And she's moved to North London and she's the sister of someone or has some connection.

As we make introductions I'm struck by her beauty
She's irrefutably fair with dark eyes and dark hair
But as she sits, I admit I'm a little bit wary 'cause I notice the tip of the wing of a fairy tattooed on that popular area just above the derrière
And when she says "I'm Sagittarian", I confess a pigeonhole starts to form
And is immediately filled with pigeon when she says her name is Storm.

Conversation is initially bright and light hearted but it's not long before Storm gets started:
"You can't know anything, knowledge is merely opinion!"
She opines, over her Cabernet Sauvignon, vis-à-vis some unhippily empirical comment by me.

"Not a good start" I think
We're only on pre-dinner drinks
And across the room, my wife widens her eyes, silently begs me: "Be Nice"
A matrimonial warning not worth ignoring
So I resist the urge to ask Storm whether knowledge is so loose-weave of a morning when deciding whether to leave her apartment by the front door
Or the window on her second floor.

The food is delicious and Storm, whilst avoiding all meat happily sits and eats
As the good doctor, slightly pissedly holds court on some anachronistic aspect of medical history
When Storm suddenly insists:
"But the human body is a mystery! Science just falls in a hole when it tries to explain the the nature of the soul."

My hostess throws me a glance
She, like my wife, knows there's a chance I'll be off on one of my rare but fun rants but I shan't
My lips are sealed, I just wanna enjoy the meal
And although Storm is starting to get my goat I have no intention of rocking the boat
Although it's becoming a bit of a wrestle because - like her meteorological namesake - Storm has no such concerns for our vessel:

"Pharmaceutical companies are the enemy
They promote drug dependency at the cost of the natural remedies that are all our bodies need
They are immoral and driven by greed.
Why take drugs when herbs can solve it?
Why use chemicals when homeopathic solvents can resolve it?
I think it's time we all return-to-live with natural medical alternatives."

"So you don't believe in any natural remedies?"

"On the contrary Storm, actually
Before I came to tea, I took a remedy derived from the bark of a willow tree
A painkiller that's virtually side-effect free
It's got a weird name, Darling, what was it again?
M-masprin? Basprin? Oh yeah! Asprin!
Which I paid about a buck for down at the local drugstore.

The debate briefly abates as our hosts collects plates
But as they return with desserts Storm pertly asserts:
"Shakespeare said it first:
There are more things in heaven and earth than exist in your philosophy...
Science is just how we're trained to look at reality,
It doesn't explain love or spirituality.
How does science explain psychics? Auras? The afterlife? The power of prayer?"

I'm becoming aware that I'm staring, I'm like a rabbit suddenly trapped in the blinding headlights of vacuous crap.
Maybe it's the Hamlet she just misquothed or the 5th glass of wine I just quaffed
But my diplomacy dike groans and the arsehole held back by it's stones can be held back no more:

"Look, Storm, sorry I don't mean to bore you but there's no such thing as an aura!
Reading Auras is like reading minds or tea-leaves or star-signs or meridian lines
These people aren't applying a skill, they're either lying or mentally ill. Same goes for people who claim they hear God's demands or Spiritual healers who think they've magic hands.

By the way, why do we think it is it OK for people to pretend they can talk to the dead?
Isn't that totally f*cked in the head?
Lying to some crying woman whose child has died and telling her you're in touch with the other side?
I think that's fundamentally sick
Do we need to clarify here that there's no such thing as a psychic?

What are we, f*cking 2?
Do we actually think that Horton Heard a Who?
Do we still believe that Santa brings us gifts?
That Michael Jackson didn't had facelifts?
Are we still so stunned by circus tricks that we think that the dead would wanna talk to pricks like John Edwards?

"Wow that's a good point, let me think for a bit.
Oh wait, my mistake, that's absolute bullshit.
Science adjusts it's views based on what's observed.
Faith is the denial of observation so that Belief can be preserved.
If you show me that, say, homeopathy works, then I will change my mind
I'll spin on a f*cking dime
I'll be embarrassed as hell, but I will run through the streets yelling
'It's a miracle! Take physics and bin it!
Water has memory! And while it's memory of a long lost drop of onion juice seems Infinite
It somehow forgets all the poo it's had in it! '

You show me that it works and how it works
And when I've recovered from the shock
I will take a compass and carve 'Fancy That' on the side of my cock."

Everyone's just staring now,
But I'm pretty pissed and I've dug this far down,
So I figure, in for penny, in for a pound:

"Life is full of mysteries, yeah
But there are answers out there
And they won't be found by people sitting around looking serious and saying 'Isn't life mysterious?'
'Let's sit here and hope.
Let's call up the f*cking Pope.
Let's go watch Oprah interview Deepak Chopra.'

If you wanna watch tele, you should watch Scooby Doo.
That show was so cool because every time there was a church with a ghoul or a ghost in a school
They looked beneath the mask and what was inside?
The f*cking janitor or the dude who ran the waterslide.
Because throughout history every mystery ever solved has turned out to be
Not Magic.

Just this beautiful, complex, wonderfully unfathomable, natural world?
How does it so fail to hold our attention that we have to diminish it with the invention of cheap, man-made myths and monsters?
If you're so into your Shakespeare, lend me your ear:
"To gild refined gold, to paint the lily, to throw perfume on the violet... is just f*cking silly"
Or something like that.
Or what about Satchmo!
"I see trees of Green,
Red roses too,"
And fine, if you wish to glorify Krishna and Vishnu in a post-colonial, condescending bottled-up and labeled kind of way then whatever, that's ok.
But here's what gives me a hard-on:
I am a tiny, insignificant, ignorant bit of carbon.
I have one life, and it is short and unimportant...
But thanks to recent scientific advances I get to live twice as long as my great great great great uncleses and auntses.
Twice as long to live this life of mine
Twice as long to love this wife of mine
Twice as many years of friends and wine
Of sharing curries and getting shitty at good-looking hippies with fairies on their spines and butterflies on their titties.

And if perchance I have offended
Think but this and all is mended:
We'd as well be 10 minutes back in time, for all the chance you'll change your mind 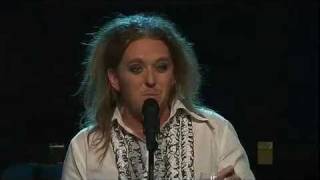