Perdu Dans Paris
Tangent
Where Are They Now? A Sale Of Two Souls The World We Drive Through A Crisis In Mid-life Follow Your Leaders The Winning Game Skipping The Distance Bat Out Of Basildon Four Egos One War Up-hill From Here
Perdu Dans Paris video Tangent twitter


The square's a picture postcard
And it's just like on TV
The brasseries and sprawling pavement cafés
Casting lumiere onto the streets of Gay Paris
And the searchlight from the great tower hits the evening
As the white buildings sauté in the oil of the setting sun...

The doorway of the Gare Du Nord is a festival
Of commuters and tourists all on their beat
The hive of cars and trams and taxis
Leaving time-lapse ribbons hanging there, all down the street
And the Sacre-Coeur lights, they stay on 'til midnight
While the ghosts of the great artists still do their rounds

As the night comes around the city settles down,
From this hotel room I've found, there's two cities in this town, and two paths to go down

There's a line of sleeping bags now, where the souvenir stands stood,
Taking the last begrudging Euros from the hands of the tourists - for the pockets of the hoods
The station canopy's a doss house now, and every city street's a lounge
Toa thousand homeless lost souls on the late shift,
On a late night litter scrounge
Pulling pizzas from the bins on the Champs Elysées
Forming huddled groups down by the Siene at Notre Dame

And as the city settles down, you don't wanna be around
'Cos from this hotel room I've found, theres two cities in this town,
And I'm living in one, but I could be in the other tomorrow,
Oh tomorrow!

Breathing in the morning air on the balcony some hours later
It all seems like a dream
And I wonder if those people gathered by the Metro,
Are the ones who slept beneath me
And the city and its monuments, will they reach the horizon now,
Whether Paris, or London, or Berlin, or Southend-On-Sea 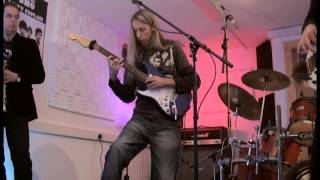