Not As Good As The Book Lyrics

Not As Good As The Book Lyrics


Called into life comes a man knuckled down, broken in, but already working
Slightly bemused by the new world he finds himself in
Adopting his thoughts to environments strange and bizarre,
He never thought to encounter,
Running his fingers through things he once read of in books

And all of it seems so unclear
It's not the future he once held so dear
But there's always tomorrow, always today
There's always something in the way

And all of it just seems so drear
It's not the future he once held so dear
But there's always tomorrow, always today
There's always something in the way

And is this the dream I had as a child?
To see moons from whatever side...
Exploring space with flashing lights
To ride in the pod a Virgil's right
To boldly go where no man has gone before
To take chicks to settle the score
I smile and push the key
And see Uncle Microsoft smiling right back at me

If I could take on those adventures
Have I reached the point where I'd rather stay at home And is the comfort of the slippers worth trading
For an evening in the Federation Neutral Zone?

They went to space in an old tin of beans haphazardly strapped to a firework,
With less than a ZX81 to direct them back home....
We sit here with Gigs (abytes) and just twiddle our thumbs
While personalising our desktops
Raising the firewalls and hoping the heatshields can hold

I watched Buzz Aldrin step out of the tin, to the Moon and start his adventure
That seems to end here with a nice coloured "skin" for my phone
I see those steps through a digital stream and a mass of hot burning plasma
Neatly wrapped up on a 50 inch screen in my home

(The future never looks
Like it reads in the books) 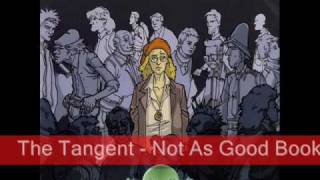 check amazon for Not As Good As The Book mp3 download
these lyrics are submitted by kaan
browse other artists under T:T2T3T4T5T6T7
Songwriter(s): Andy Tillison
Publisher(s): Cynical Songs
Record Label(s): 2010 Inside Out Music
Official lyrics by