Whatever Happened To Sin Lyrics

Whatever Happened To Sin Lyrics


The Christian counselor wrote, quote
"Who is the only humane choice ahead
If you can't support it
Why don't you abort it instead?"
You say you pray to the sky
Why? When you're afraid to take a stand down here
'Cause while the holy talk reads like a bad ad lib
Silence screams you were robbing the crib
Say it ain't none of my business, huh?
A woman's got a right to choose
Now a grave digger, next you pull the trigger what then?
Whatever happened to sin?
I heard the reverend say
"Gay is probably normal in the Good Lord's sight
What's to be debated?
Jesus never stated what's right"
I'm no Theology nut
But the Reverend may be a little confused
For if the Lord don't care and he chooses to ignore, ah
Tell it to the people of Sodom and Gomorrah
Call it just an alternate lifestyle, huh?
Morality lies within
Consciences are restin', please repeat the question again
Whatever happened to sin?
When the closets are empty and the clinics are full When your eyes have been blinded by society's wool
When the streets erupt in your own backyard
You'll be on your knees praying for the National Guard
If you don't care now how the problems get solved
You can shake your head later, that you never got involved
'Cause the call came a ringing from the throne of gold
But you never got the message, never got the message
'Cause your mind's on hold
A politician next door
Swore he'd set the Washington Arena on fire
Thinks he'll gladiate them
But they're gonna make him a liar
Well, he's a good ole boy who was born and raised
In the buckle o' the Bible Belt
But remember when you step into your voting booth
He'll never lie, he'll just embellish the truth
Promises were made to be broken, right?
You've gotta play the game to win
When you need support, tell them that you born again
Whatever happened to sin? 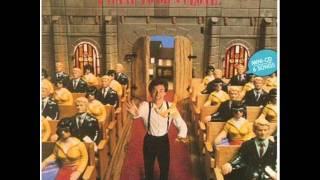 check amazon for Whatever Happened To Sin mp3 download
these lyrics are submitted by BURKUL4
browse other artists under S:S2S3S4S5S6S7S8S9S10S11S12S13
Songwriter(s): STEVE TAYLOR
Record Label(s): 1990 Sparrow Records
Official lyrics by