Rock To It Lyrics

Rock To It
Shad
Lucky 1's Wild I Don't Like To Brother The Old Prince Still Lives At Home Now A Daze I Heard You Had A Voice Like An Angel - Psalm 137 Out Of Love Pt. 2 Hot Dog Garbage Intro: Quest For Glory
Rock To It video Shad twitter

Rock To It Lyrics


Rock to it, a free free to it, to the beat to it this
is how we do it

Shad can cox plots and perfects clever scams
you can't find a better man in a Eddie Vedder Jam
MC's can't see the flow, unbelievable
we set records even when the needles broke

don't need the dough, asking more bang for your buck
the only lands that Canuck that can't handle a puck
played penalty killers skillfully pass and poke-check
when black flows jet there's more cash than opeck

I spit a hard-hitting verse, when I'm spitting it hurts
I never shift into first, yet alone put the whip in
reverse
my free-styling's like a gift and a curse
I'll stick with the verse, they gotta think I've
written it first

I'm that ill rap scholar never sweat the finances
just taking out a bank lone as big as my camp is
these MC's need to stop taking their chances
why scrap when you know my arms stronger than Lance's? touring France with these mad rappers locked in their
stances
they thought they had a move until I blocked their
advances

I'll be low key chillin rhymes, filling the whole sheet
feeling down loading on sizzlon so seek
students slash(/) rappers songs dealing with no sleep
I'm still a cold thief when I'm stealing the show peeps
get out this young brother with doubts
my tongue smothers the whack
the dub never uncovered the traps

pick up the phone just to get the tone
my bicep claim I gotta leg ups, so when I walk the talk
I high-step
as a fetus I kick rhymes upon their skin
even back in 82 my ultra-sound was the jam

I just rock to it never get forced into nothing
but words like a mullet-cutting short on the front end
y'all life's more than cake, no offense to the ballars
but we all pay too much attention to dollars

brainwashed now I'm still learning how to be me
worth millions, I'd rather be free, uniquely
no, I may never know myself completely
If I make it home well maybe then I'll meet me 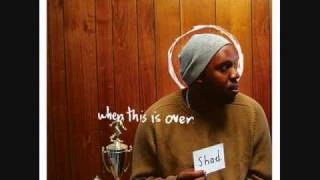 check amazon for Rock To It mp3 download
these lyrics are submitted by kaan
browse other artists under S:S2S3S4S5S6S7S8S9S10S11
Record Label(s): 2005 Shad
Official lyrics by