[The D.O.C.]
This ain't no basic hip-hip you make in a bin in your garage
I'm down for showing all you hoes who the hell's in charge
A cold lethal rap warrior, I'm on the attack
Cutting ducks no slack so keep your bitch ass back
Deadly, yeah kicking it, the solo style
On top of the pile, the reigning chump worthwile
Hanging tough I'm the leader, ain't no need to pretend
Like an elevator up, I mean I'm on the ascend
I ain't no east coast rapper, this is a southerner's song
Be warned, it's hard to try and hold a project born
Saying shit that you like, never wearing no Nike
f*cking it up and all I need is my goddamn mic
And a micstand, I don't need no band to play
With a DJ like Rock and a partner like K in effect y'all
f*cking suckers up like five
It's Fila Fresh and I'm the toughest man alive!

[The D.O.C.]
Down from the beginning, hitting hard I'll admit
They keep offering me money and I keep taking the shit
And coolin' cool at the crib cause being cool's how I live But bucking up will get you rocked if you're a bullshit kid
I like it stylistic, c'mon let's get with it
Coming up with fresh new rhymes like I'm a mystic
You see the D.O.C. and all the Fila I be splurging
Yeah, I know it, you think that I'm encouraging
You to steer wrong boy, so I can go off
A quick run and when I'm done you bet not cough
I'm an annihilator, standing a full 6'3"
And I reall don't think you wanna f*ck with me
But then there's always those, clocking all your shows
Getting all out of line trying to impress they hoes
I know some niggas like that round the way who won't quit
"It's the old top" Man shoot that muthaf*cking shit
I'm physically tough, physically able I qualify
Don't try that gangster bullshit here, this an't no I Spy
You better chill out, that's if you wanna survive
It's Fila Fresh and we're the toughest men alive

[Fresh K]
Yeah, for all you suckers who thought t'all was down, that's
right, kicking that bullshit, yeah we in effect, that's right
holmes, we in effect so get your bitch ass back before you
be floating up a creek, know what I'm sayin?

[Fresh K]
Yeah, and if you want your beast to be deaf, call Dre before Monday! 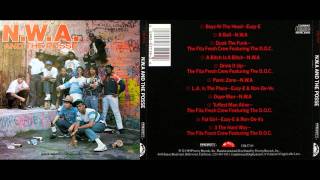