Something Like That
N.W.A
Fuck Tha Police I Ain't Tha One A Bitch Iz A Bitch I'd Rather Fuck You The Dayz Of Wayback Quiet On Tha Set Niggaz 4 Life Hello Parental Discretion Iz Advised Express Yourself
N.W.A wiki Something Like That video N.W.A twitter


[Dre] Ah yeah, yo Ren, yo ready to do this shit ?
[Ren] Yeah, Dre, let's rip shit up
[Dre] Hey, yo Yella Boy, why don't you kick me one of them
funky beats ?
[Ren] Yo, we got my homeboy Eazy E in the house
[Dre] Compton's definately in the house. Yo Ren, whatta we gonna
call this ? Tell'em what yo name is ?
[Ren] Yeah something like that
[Dre] Allright, let's kick this shit on the one
Kick it

[Ren]
Back by demand, now it's big as f*ck
because you as the public, you should know what's up
"Compton's in the House" was more than gold, it was a hit
cause it was based on some crazy shit
So our final conclusion has been permitted
Punks made us a target and knew that we'd hit it
But that was a part of showbizz
[Dre]
Hey yo homeboy, why don't you tell'em what your name is ?
[Ren (Dre)]
Well for the record it's Ren, and for the street it's villain
And strapped with a gat, it's more like Matt Dillon
on "Gunsmoke", but not a man of the law
I'm just the baddest motherf*cker that you ever saw
See, I peep and then I creep on a fool
Get my bloodpressure high but still stay cool
Dig a grave of a nigga lookin' up to me
that really had the nerve that he could f*ck with me
Who was the man in the mass, while I was waitin' to axe
you know, it's MC Ren kickin' mucho ass
Gettin' respect in showbizz
Hey yo homeboy (Whassup ?) Why don't you tell'em what yo name is ?

[Dre]
Dre, the motherf*ckin' doctor, bitch hopper
The sucker-motherf*cker stopper
Back with a vocal track that's a fresh one
so now, let's get the motherf*ckin' session
goin', flowin'. It's time to start throwin'
rhymes. So keep in mind all the suckers I'm blowin'
cause I'm a start showin' the time
Never sayin' I'm the best and just goin' for mine
Unlike a lotta suckers who claim they're gettin' busy
when their records only make good frisbees
You need to stop runnin' off the mouth Stop and think before you put some whack bullshit out
It's not difficult, in fact it's kinda simple
to create something funky that's original
You need to talk about the place to be
who you are, what you got, about a suck MC

[Dre & Ren]
This is portable, something to f*ck with yo ear
Ren and Dre will appear when the sound is clear
to f*ck it up like we always do, and that's the trick
Sayin' some shit to make the bitches wanna suck our dicks
But it's an everyday thang
communicating to y'all with the Compton slang
Compton's back in the house and your appartment
so open your door, by the way, so we can start it
Test the monitors and call this mic
cause the way we feel, we're gonna f*ck it up tonight
I got my mic in my hand, with a hell of a grip
Bitches screamin' and shit, now it's a trip
Waitin' for the grand finale, or the end
or stupid rhymes set be Dre and Ren
Well, like a kid, we get new shoes and go faster
Smilin', like hell, as we move past the
suckers, the motherf*ckers with the ego hype
cause we're positive and they're on a negative type
and if think we're about to quit...
motherf*cker you ain't heard shit

[Dre] Yeah, that shit was funky, you know what I'm sayin', Ren ?
[Ren] I know what you're sayin', this is MC Ren and Dr.Dre
cold kickin' it in the place
[Dre] Ah yeah, my mellow Eazy E in the house
Yella Boy in the house
my boy Ice Cube
Arabian Prince cold rockin' shit
[Ren] Oh yeah, hey, I'm a say whassup to my homeboys from CNW
[Dre] Yeah, hey, yo Ren, whatta we gonna call this shit ?
Tell'em what yo name is ?
[Ren] Yeah something like that... 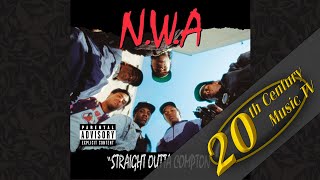