To the people over here
To the people out there
To the people, the people, the people, people, the people, people
From everywhere watching the show
Paying top dolars because they know
When we're on the stage, we're in a mothaf*ckin' range
So Dre, why don't you get the 12 guage (yeah)
And show 'em how Eazy-Duz-It
So if you punks wanna make somethin' of it
Step up, run up, get up, what's up sucker
You want some of this?
Then you're a stupid mothaf*cka!
Kickin' - like the kick from a kickdrum
Yella boy on the drum gettin' dumb
Programmin' - a beat that's hittin'
And if you listen then you know we're not bullshittin'
Dope - like a pound or a key
So shut de f*ck up and listen to me
I make these killings
I got money to the ceiling (why's that?)
Cuz I'm a mothaf*ckin' ruthless villain
MC Ren - stamping any fool in my way
With some help from my homeboy Dre

Speakin' of Compton, it's makin' me sick (why?)
Everybody'z talkin' that crazy shit
Sayin' they were raised in the CPT (aha)
Just as I was, they try to be like me
Poppin' that shit, get the f*ck out my face
Knowin' that they never even seen the place
Claimin' my city is my city they claim
Mothaf*ckaz we're about to put some salt in your game ..

Yeah I'm tired of these mothaf*ckerz runnin' around town, talkin' about
they're from Compton and shit, tryin' to get on the bandwagon ..
Yeah Dre, I know what you're sayin' man, but let's tell 'em who we're
talkin' about ..

WHAT DO YOU CALL A CREW THAT CAN RAP LIKE THAT ...?
yo NWA call 'em mothaf*ckaz wack..
(yeah you know what time it iz, listen to why we call 'em wack)

MC Ren is the mothaf*ckin' Coroner
I'm gettin' rid of mothaf*ckaz as if they was a foreigner
Show no crip to pretend when I'm seen
I punch you can block it but I'm a still get in
This ain't a TK yo in the first
But it's some shit from a nigga in black it's much worse
Then a beat from Tyson cuz Ren is not nice and
Your ass is better off just rollin' a dice and
Findin' you a number for luck
Cuz you all need it when you see I don't give a f*ck
My identity, and the shit is gettin' shown
Without a video I'm still gettin' on
I'm at a show then my picture is takin'
One click of the flash and punk niggaz are breakin'
To the door, tryin' to join my fan club
Lipstickin' over one of my dubs
And it's the minimal scratch for the moment
Until I f*ck up the so called opponet
That's standing in the zone of the twilight
Sayin' how in de f*ck did he get mixed up in my fight
It was'nt a mistake, it was a set-up
So until I'm finished poppin' my lyrics you should shut up
And don't attempt to speak
Because it's bad enough you rollin' up shit quick
With a nigga like Ren about the hit
Now lemme hear you mothaf*ckaz talk some more shit
I'm a bust your ass in your mouth,
Yo, unless you're sayin' "Compton's in de house"

Who realy cares - about a sucker on a take off
Bust de move, we can have a shake n' bake-off
Me and you can go cuz I don't care yo
Rap fight or guerilla warfare
We can rumble, cuz when my lungs go in and out
I kick rhymes in a bundle to win about
Or scarier scaffle
I just muffle the eye position, there's no competition
Let 'em know that Dre is gettin' stronger
Compton's in de house but now it's some' longer
I won't get set-up, shut up, I'm kinda fed up
You can say uncle and I still won't let up
Cuz Dre is the mothaf*ckin' doctor
And if me and Ren's on the mike it's like propaganda, no doubt
"Boy you should've known by now" ..

Compton's in the house
Yeah, it's time to put Compton on de map, don't ever think you can get it on
you stupid mothaf*ckaz!

Compton's in the house .. 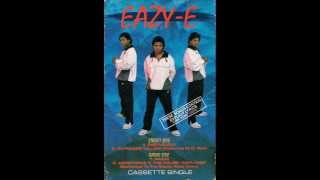