Riding through the city with the windows down
Heard that you was talking 'bout him right there
Boy I swear to god you better switch pronouns
I don't ride waves, I don't switch no sound
I don't hang ten, I'm ten toes down
Had a little song I was gonna put first but boy, god damn, this an intro now
Right back to it never left though
Except for that week I had strep throat
Know this shit boom when we come down south and I had to bring my own Lil Metro
2for's on it, man the kid psychotic
If you looking for the flows or the hits, I got it
When the sun goes down I'ma creep up on it
Like a thief in the night, finna pick your pockets
I ain't really f*cking with you hypebeasts (nah)
Really though, I put it on everything (everything)
I don't really be in no shindigs
I ain't been happy since 13
CyHi told me how to deal with the writer's block
Got me thinking maybe I was thinking inside the box
Now we in the house, finna bring it around the block
Know they wanna hang, but we hanging them out to dry (woo, woo, woo)
Guess he never seen this shit coming
She a little older, didn't think she be coming
Only thing I'm trying to do is keep this shit jumping So I turned this motherf*cker to a pole vault
Chicken finger plate for the road, dog
Heard that you was working on a mixtape
Really you can keep it like the coleslaw
Bring the beat back like the overalls
Your boyfriend a tool, that's a Kobalt
When I'm in the booth, make the snow fall
Ain't nobody in my class, check the role call
One name on it, bring the beat to me I'ma come skate on it
Something like Timmy, I'ma Wuntayk on it
Boy, I know this shit's hot, no one takes on it
Pre-Med shorty, turn me on like she hit the reset on me
Told me that we living different lives right now
When I graduated, it was recess for me
All these frat boys won't f*ck with the boy
Even when it's really something they could come to enjoy
She don't listen to the lyrics, but she f*ck with my voice
I got one-hundred situations that I want to exploit and I'ma do it
That's right, riding through the city on my
Last life, know I had to beat it down
Last night, when she leave the crib she get
Baptized, every time
Funny how it all works out
Right before I did this, I was feeling burnt out
Now the whole city 'bout to get burnt down 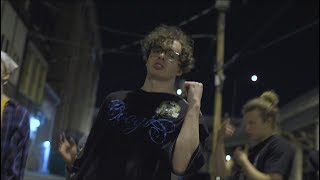