Walk In The Park Lyrics

Walk In The Park Lyrics

Tip, do you wanna dip? (Dip)
I can tell you ain't having that much fun (Nah)
Three years in with your ex-boyfriend
Y'all tied that knot but it's back undone, oh yeah
I'm tryna stack one ton (Uh-huh)
You ain't gotta ask where that come from (Oof)
I ain't never rocked no Pacsun
I was off the pack at the mall St. Matt
I skipped class, no hallway pass (Ayy)
I'm team cap', you was always last
She got good hands and a Allstate ass
I got good kids and they all came fast (Ayy)
I ain't gotta say it, you can come to the 'Ville
Just ask who's hot, they gon' all say "Jack" (Jack)
Tell me stay down but I always have
When I come around, man, they always ask
"How does it feel?" (How does it— uh, oof)

Ain't shit to me, it's a walk in the park (Oof)
Y'all too smart, can't talk from the heart
I got sauce and it's off of the charts (Charts)

Keep it raw from the start
That's what she want from me, okay, cool (Cool)
My chick love me and she don't make rules She ain't gotta ask if I'm gon' stay true (Ooh)
One-take-Jack, I ain't gon' take two (Two)
Urban got tabs and I'm gon' take two
I was in the KY doin' eight-five on the six-five
Dash when I saw a state troop' (Oof)
Y'all can't do what we do (Oof)
Everybody tryna come do it, reboot
Y'all ain't have faith from the shit back then
But I ain't even trip 'cause I knew it'd be cool, like "Woo"

Ain't shit to me, it's a walk in the park (Park)
Y'all too smart, can't talk from the heart
I got sauce and it's off of the charts (Oof)

I've been tryna catch myself off guard
I f*ck with you if you get that part
Worser-than-me's never hit that hard
Worser-than-me's never got too far (Too far)
I can tell y'all boys not too smart (Nah)
Ain't shit sweet but the azúcar, ayy
This shit goin' too far
I'm timeless, y'all be gone tomorrow
Oof, had to wait for the dark
Now you tryna pull up, get on two bars
Uh, you can stay to the side, uh
You don't really want no part to this
Fifteen deep and we hard to miss
Name somebody comin' hard as this (Yeah)
My nuts hang like ornaments
I'm not ready to be in love yet
I just want somebody I can argue with (Yeah)
Want somebody that's hard to get
That's just life, that's part of it
That's part of it (That's part of it)
That's just life, that's part of it
I said, "Pardon me" (Yeah)
I got ice all in my arteries, like D'Lo
Hometown hero (Hero) 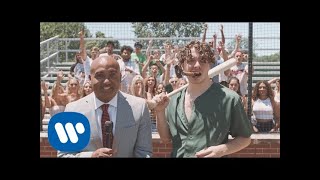 check amazon for Walk In The Park mp3 download
these lyrics are submitted by itunes1
browse other artists under J:J2J3J4J5J6J7J8
Songwriter(s): Jack Harlow
Record Label(s): 2019 Generation Now Atlantic Recording Corporation for the United States and WEA International Inc for the world outside of the United States
Official lyrics by