Will you have to wait? Yes
But here's a raincheck
Just a little taste test
For your tape decks
You've been mean muggin'
Looking like fiends buggin'
Waiting ages for me to release something
Here it is, my gift to you
Feeding off the energy I get from you
It's funny how it works isn't it?
I've been itching to get in the game ever since the first scrimages
Now I'm laying the track down
No more playing the background
I'm making that cash now
Try'na get my paper to stack pal
But I think jealousy is making you act wild
Keep my name in ya mouth
Not beef provoking, eh
That's free promotion, thanks
I gotta say thanks because,
All y'all little shit talking my name a buzz
Around here, they don't smile or say "what's up"
They'd rather mean mug and hate ya guts
But that's life man
Ya see envy is a trait of the weak We burning breeze and shitting in the place that you eat
Homie, I don't gotta use a tape to diss you
Or try to prove to you that my game's official
In beef I never bring the pistol
The reason being; I got anger issues
I don't wanna take a life over shit talk
Or just portray that life cause it's hip hop
Bitch stop, worry about ya self
I got my own back, I do this without no help
I don't know who my nemisis is
My own friends think my old shit's better than this
They're like: "Where's the punchlines? Where's the wordplay? "
I pity those still stuck in the first phase
Ya I sucked in past tense
Now I'm rounding third base, you ain't even up to bat yet
See, I'm making actual music
Quit rapping about rapping and actually do it
I don't got nothing left to say
But here's a raincheck, hope you have a pleasant day
Bitch! 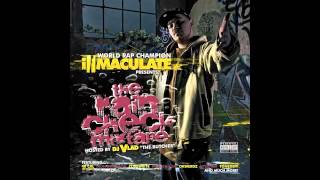 check amazon for Rain Check mp3 download
these lyrics are submitted by kaan
browse other artists under I:I2I3