I'm a beast these days, I need beats like a Taliban
need grenades. I don't stutter, better ask someone
in the Cali rap scene, I'm saying
my flow gutter, like where alley cats feed on prey
I'm no sucker, I'm a savage, son
Had my ass kicked once or twice but rather that than run
Now understand me, I'm a new man
And observation has taught me more than newsstands and school can
I'll prove that this smooth cat can Bruce Banner the mic
Your crew's gassed up and too amateur like,
feel ashamed that your whole camp's nothing
Sandpeeps kill the game 'til the whole fam's buzzing
Soon as you feel the flames you wanna close that oven
it's deep in and [...] keep the program running
I swear to god, I'm on a Coke can budget
But step up and get ripped like Conan's stomach
I'll tear 'em off, (who?) - anybody that's flexing
I swear to god, nobody's this hungry that's repping
And so what if I'm turned on by money and weapons
On the sight of myself I've never seen an ugly reflection I'm a youngster, up and coming, with something to prove
Certified champion hungers for something other than food
Northwest drunken master, sounded sorta like a buzz
(Let me f*cking rap) Slurring, someone pour a pint of suds
Just imagine the younger fans absorb it like a sponge
I understand it wasn't planned to glorify the drugs
I'm stuck making music about it
f*ck it, with every verse I'm kicking mud-caked boots on your couch's
Take that, mo'f*ckers is so quick to write you off
To me, you won't know shit until the title's yours
Try to get it, I promise it ain't a easy task
You don't want it wit us I got a gift and it's beating ass
Competition's pride is thin as a sheet of glass
Drop and watch it break under pressure and cue the evil laugh (haha)
The audience has bought a ticket just to see me spaz
And I'll body this then drop the shit and let the needle scratch 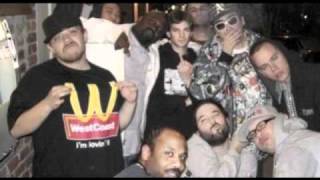 check amazon for No Sucka mp3 download
these lyrics are submitted by Trakk
browse other artists under I:I2I3