Only & Ill
Illmaculate & Onlyone
Nobody Dirt Audiobiography Flowers At A Funeral High Yet? Met Her Through A Friend Gattaca Leanin Grow Ops Can't Take That Away
Only & Ill video

[Verse 1: OnlyOne]
What you know about Only & Ill? We go way back
Keep your emotions to yourself, we don't play that
I plant a bomb where the KKK at
Where's my AK at?
Yea, yea take that
Now I don't mind cause I don't have it
Let me invite you to my psychopathic mind of madness
I'm trying harder to die a martyr
I don't like techno, but I'm a Prodigy and a Fire starter
The riot sparker, barbed wire lion heart
The heckler heckles, the suppressor is the silent partner
I heard all that shit, how could you say that?
I take a piss where your motherf*ckin' grave at
You beef with me? Ten years, I await that
Show up where you stay at like, "Surprise, payback."
You just been abducted to hell by a spacecraft
And you can go f*ck yourself if you hate that

[Verse 2: Illmaculate & OnlyOne]
What you know about Only & Ill? We go way back
You hungry then we know how you feel. Just wanna say that
You hustle then we know how you feel
Between your goals and your bills
Know where the bank at, face mask, safe cracked
Meaningless violence with reason behind it
Throw a Molotov cocktail party for media bias and thought control
Assassinations and the secrets that die with 'em
Witness the fall of giants like dominoes
Old man Rothschild, broke ass dropout
Cold cash and more bullets than Homeland, stockpiled
This ain't a Kodak, we 'bout to load that, pop rounds
f*ck where the sniper scope's at, roll past, top down They got something personal with me
I smoke a lot, big, this is all personal with me
I won't put down my luggage, I don't push pounds in public
Don't put out my blunt tip, I got Kush clouded judgment
All I care about is who to body, what leagues payin'
Think I'm playin' then you are probably freebasin'
All they talk about is Illuminati and freemasons
I'll do a Molly my crew'll honestly cremate 'em

[Verse 3: OnlyOne & Illmaculate]
What you know about Only & Ill? We go way back
Feel like it's Ghost in the Shell, get your brain hacked
I took the black box and survived the plane crash
I take dabs and I taste wax 'till I face plant
When I splash thoughts a tidal wave pass
In a straight jacket I lay flat on the train tracks
This Monsters, Inc
The last of the monsters after the monsters have all gone extinct
This Only & Ill, Ghost in the Shell
I could past the mag send the police to hell (Yea!)
Yea I know how you feel, no love for them
And anyone that owes me or showed me an L
We rollin' up me some clones then the homie can help (bitch)
Know by the smell that he's growin' it well, it's potent
Lurkin' the city, herbal and sticky, blaze that
Make a Nissan swerve like a Bentley or Maybach
I used to practice recording my songs on the 8-track
Bloody floor, buncha f*ckin' heads in the Maytag
Holy ghost, I'll cut ya'll face with the stain glass
What you know about Only & Ill? With your fake ass 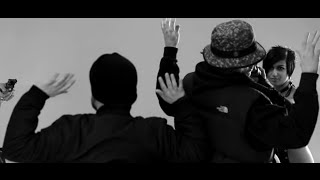