[Scarface]
I don't wanna - run no more, but I know that if I stop
I'll be another nigga headed to heaven, hangin with 'Pac
These motherf*ckers look at me like I'm a slanger
Makin threats to my family, dawg I'm in danger
Who do you call when these agents want you dead
and they hit these penetentiaries and niggaz make a pledge
So I dip and duck the feds, all my homies duck out on indictments
Caught up on the phone, talkin prices (hello)
25-to-life's the mandatory minimal
My whole community gets treated like they criminals
Why are them bitches gettin motherf*ckers hung
Got a C.I. on the inside and everybody's sung
Mothers and fathers seperated from they sons
Households are broken, you couldn't hold your tongue
If it's yours, say it's yours, take the case, do your time
When you was out here gettin money from it e'rything was fine
Now you cryin in your jail cell, stressin on the case
And the D.A. is at a nigga every single day
I can see it in your face, in the middle of your soul
You in question of your manhood homey - keep it cold

[Chorus: repeat 2X]
We don't talk to police, we don't make a peace bond
We don't trust in the judicial system, we shoot guns
We rely on the streets we do battle in the hood
I was born in the G Code, embedded in my blood

[Scarface]
See I be on some street shit, don't talk to police
I won't accept a visit from agents who wanna see
if I got shit to say about a nigga case I'm a motherf*ckin nigga through and through, I ain't gay
Know a nigga caught a case and he took his 25
Sat it out on a pill, and gave him back that time
A soldier in his mind and his actions said the same
Told a cracker tell your mammy suck his dick and {?} James
Ain't no motherf*ckin game, we been livin this for real
When the government is workin, real niggaz never squeal
Right here the truth revealed, Troy you a mouse
Yeah you rappin but the homey Lil Pots can't get out
Niggaz they hit the pen, they get charged, then get out
On a rule, 35, he a bought it for the cops
You can hear it in his voice, I done listened to the tapes
Now you showin up in court, testifyin for the state

[Scarface]
I'm knowin all the scams, all the tricks to the trade
Know a nigga tryin to get clean, and you get in the way
Know a nigga tryin to get green, and you stick out the bait
Cause a nigga like a dopefiend, can't rehabilitate
Still stickin to the G Code, we playin by the rules
We don't f*ck around with new niggaz, cause new niggaz is fools
We don't photograph the homies, that'll catch a nigga up
On a picture you a victim, bottom line nigga f*cked
Only connect the real, stayin down with the true
I got love for you Ant, you a real nigga Spook
My nigga Spoonie Gee, I can only name a few
But there's a thousand motherf*ckers in the pen bulletproof
So this one here for you, I'm a rep it 'til I die
f*ck a 5-K-1, check his P-S-I
Send his ass to the top if he say he sit at home
He a motherf*ckin snitch, snitchin niggaz need this song 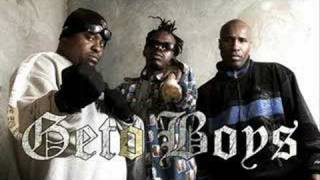