[J. Prince:]
Ah yeah…
Yeah, this is Lil J and the Geto Boys in this mutha once again
And we kicked the door in just like I told you we would in '91 and '92
But you know, there's a lot of people mad about our success
Such as the DEA, IRS, and other wicked people in high places
You know, when I was growing up, people used to tell me how dirty the system was
But I refused to be controlled by an ungodly system
So now they're mad, and I'ma tell you why
I was born in the ghetto, but I didn't allow myself to be systemized by the welfare system and poverty that they try to handicap us with in the ghetto
I worked my ass off, I pulled brothers off the street
And together, we built a multi-million-dollar record company in a few years
I did it the way it was supposed to be done
By hiring lawyers and accountants, make sure everything is done legally
But there's still one problem: I'm Black So, those people whom I referred to earlier feel like I've done something wrong
And escaped all the traps they set for us in the ghetto
They really are upset with me for helping my brother get off the street
Yeah, they were getting down for theirs—you know what I mean
Doing what they had to do to survive
So you know what they say? Those guys at Rap-A-Lot must be doing something wrong
Because it's no way a group of niggas from the ghetto can run a multi-million-dollar business
But see, it's all a conspiracy against ghetto boys all over the world to keep down
But you know what? It's our time, and we can't be stopped
Until death do us apart
So keep supporting Rap-A-Lot, because they only kind of dope we're selling
Is dope CD's and cassettes
Yo, Bido, Scarface, Big Mike, and Bushwick
Here's some of that ghetto dope processed in 5th Ward Texas
Explain lyrics
Correct lyrics 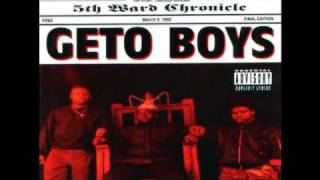 check amazon for Intro mp3 download
these lyrics are submitted by gsba1
browse other artists under G:G2G3G4G5
Record Label(s): 1998 Rap A Lot
Official lyrics by